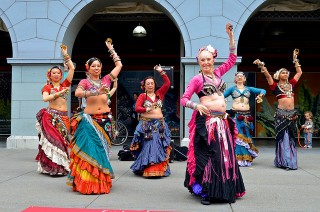 Weight gain is harder to avoid as you age, but it’s not impossible. By making simple changes, you can dodge that spare tire that often accompanies menopause. Read on for 10 expert tips to stop middle-age belly fat…

If you’re a woman in midlife, you face more than your share of problems: hot flashes, night sweats, too many responsibilities and too little time. But perhaps none is more dreaded than the sudden appearance of that midlife muffin top.A belly bulge is common around menopause, explains Nanette Santoro, M.D., chairwoman of Obstetrics and Gynecology at the University of Colorado at Denver and a spokeswoman for the Endocrine Society. But it has as much to do with aging as with menopausal changes, she says.

“Decreases in growth hormone, increases in insulin resistance and reduced physical activity all contribute to the tendency to gain weight and fat,” she notes.

While the loss of estrogen may not be responsible for all those added pounds, it can affect where they end up.

“There has long been an association between menopause and accumulation of more belly fat,” Dr. Santoro says.

“Studies in women have demonstrated an increase in waist circumference and abdominal fat associated with the final menstrual period,” adds Deborah Rhodes, M.D., associate professor of the Department of Medicine at the Mayo Clinic in Minnesota.“What women perceive as weight gain due to menopause may more accurately be described as fat accumulation around their middles,” she says.

Fortunately, midlife weight gain and menopausal belly fat aren’t inevitable. By following some basic weight-management tools – along with advice designed to reduce abdominal fat – you can prevent, or at least minimize, that spare tire.

These 10 tips (fully explained in the original article), will get you there…

1. Change your diet.
Your caloric needs decrease as you age, so watching what you eat is more important than ever.
2. Don’t be fat-phobic. Your body needs fat for energy and to absorb certain nutrients – such as vitamins A, D and E. Because it’s filling and digested relatively slowly, fat also keeps you satisfied longer, Heller says.
3. Focus on fiber. “Fiber is important for weight management, as well as gut health and digestion,” says Virginia-based registered dietitian and nutrition consultant Danielle Omar, author of Skinny Juices (Da Capo Lifelong Books).
4. Eat plenty of protein. Protein helps keep your blood sugar steady, which reduces food cravings. And your body burns more calories digesting it than it does for fat or carbohydrates, Omar says.
5. Boost the burn. Since metabolism slows in midlife, consume foods and beverages that can rev it up, Omar suggests.
6. Set aside the sugar. Sugar-drenched foods, such as soda and sweets, quickly elevate blood sugar levels, causing your body to release more insulin, Omar says. And that signals your body to store more fat, especially in the belly.
7. Don’t skimp on sleep. Years of research have shown that too little sleep is associated with being overweight, according to the National Sleep Foundation (NSF). Too little shut-eye slows metabolism. It also increases levels of the hunger hormone ghrelin, which can increase food cravings, and decreases levels of leptin, which helps you feel satiated, according to a 2010 University of Chicago study.
8. Keep stress in check. Family and work responsibilities can make midlife a stressful time. And that can lead to unhealthful eating, Dr. Santoro says. “Studies show that in certain stress states, we choose salt-, sugar- and fat-laden foods,” she explains.
9. Get active. Regular exercise burns fat, and may help reduce belly fat in particular, says aging and fitness specialist Joan Pagano, author of Strength Training Exercises for Women (DK Adult). And because exercise improves your physical conditioning, the more you do, the more active you can be.
10. Build strength. Muscle mass can diminish by as much as 3%-8% each decade after age 30, according to the NIH – a condition known as age-related sarcopenia. But strength training can help prevent this, or build even stronger muscles than before.  And because muscle burns more calories than fat, that means you’re less likely to gain weight, the Mayo Clinic says.

Working on weight loss? Then you probably want results — fast. Let me save you some time: skip the fad diets. Their results don’t last. And you have healthier options you can start on — today!   Doesn’t hurt to find out yourself if the following claims and methods work for you. Surely some calories will be reduced through ...