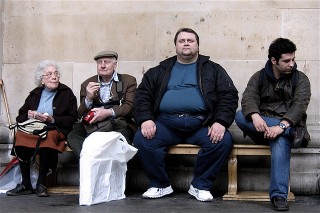 Two out of three Americans are now either overweight or obese. Obesity has become the number one form of malnutrition in the country, and no group has been hit harder than our children.

Childhood obesity in the US has nearly tripled since 1980, and one in five kids is now overweight by age six; 17 percent of children and adolescents are obese.

As noted in a recent article by investigative health reporter Martha Rosenberg,  the weight of the average American increased by 24 pounds in the four decades between 1960 and 2000.

In her article, she reviews five scientifically-backed factors that contribute to Americans’ expanding waist lines, which I’ll review here. I’ve also covered all of these more in-depth in previous articles, so for additional details, please follow the hyperlinks provided.

Contrary to popular belief, obesity is not simply the result of eating too many calories and not exercising enough.

While those are part of the equation, there are a number of other environmental and lifestyle factors that are likely to play a much more significant role, if nothing else because most people don’t realize they’re affected by them, and therefore fail to address them.

#1: Antibiotics in Food and Medicine

Compelling evidence suggests antibiotic overuse and obesity are intricately linked, although the reasons why didn’t become clear until we discovered how your microbiome influences your weight.

#2 Other Growth-Enhancing Drugs Used in Livestock

Other growth-enhancing drugs are also used to fatten up livestock, and these too may wreak havoc on your health. Ractopamine is one example. This beta-agonist drug works as a growth promoter by increasing protein synthesis, thereby making the animal more muscular.

In human medicine, beta-agonists are also found in asthma medication, and stubborn weight gain is in fact a common complaint among asthma patients using Advair (a beta-agonist drug)—so much so that the manufacturer has added weight gain to the post-marketing side effects.

Many of the growth-enhancers routinely used in the US are banned around the world for their potential health hazards, which go far beyond weight gain.

Many common household chemicals are known as endocrine disruptors, a number of which are found in plastic products. These chemicals are similar in structure to natural sex hormones such as estrogen, and can interfere with their normal functions.

Some of the most pervasive examples include bisphenol-A (BPA), PCBs, phthalates, triclosan, agricultural pesticides, and fire retardants.

The business of artificial sweeteners is built on the idea that no- or low-calorie sugar substitutes will help you lose weight. Unfortunately, this simply isn’t true. Research has repeatedly shown that artificially sweetened “diet” foods and beverages tend to stimulate your appetite, increase cravings for carbs, and stimulate fat storage and weight gain.

Part of the problem is that artificial sweeteners trick your body into thinking that it’s going to receive sugar (calories), and when the sugar doesn’t arrive, your body signals that it needs more, which results in carb cravings. This connection between sweet taste and increased hunger can be found in the medical literature going back at least two decades.

Last but not least, there’s the issue of junk food marketing, which is particularly detrimental when aimed at kids. Kids are quite literally being deceived and manipulated into destroying their health potential by junk food companies seeking revenue. There’s really nothing “accidental” about rising childhood obesity rates when you take deceptive marketing into account… Marketing to children has actually turned into a full-blown science. For example, “the nag factor” has been studied to the point that marketers can be advised on what kind of tantrums are most likely to push parents into giving in to their child’s demands!

continued on next page:

Dancing for Your Health allows people of all ages to use dance as a fun, no-cost form of exercise. If you know the steps –  let your body take it from there! You’ll not only be the hit of the next party, but getting and staying healthier too! Tangos, waltzes, sambas, and foxtrots are hits on ballroom dance shows – you can do it too. Will ...