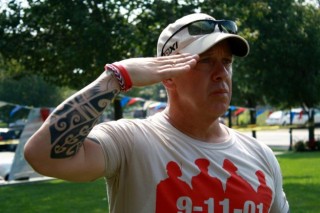 Thirteen years after the September 11th terrorist attacks in New York City, thousands of first responders continue to struggle with health problems, some which are just being diagnosed.

Respiratory illnesses like asthma and sinusitis are common among those who participated in the WTC recovery efforts. And studies show that the incidence of cancers for 9/11 first responders are 15 percent higher than the general population.Thyroid cancer was 239 percent higher.

John Feal was severely injured on the Ground Zero site when an 8,000 pound steel beam crushed his foot.

He started the FealGood Foundation, which advocates for physically and emotionally injured first responders and helps them get compensation.

Feal tells Here &Now’s Jeremy Hobson that he believes post-traumatic stress disorder is the number one killer of 9/11 responders.

“My injury pales in comparison to those who are sick and dying — or who have died from their 9/11-related illness. These invisible diseases are literally killing these men and women on a daily basis, and sadly 2,749 innocent lives were killed on 9/11, because of senseless violence but we’re losing people all the time.

“As a nation, we are going to pay homage and remember those who died on 9/11. We do that every year. But let’s finish the sentence: there are really good men and women who are sick and dying because of their heroic actions that didn’t die that day—but were given a death sentence.”

On compensation for 9/11 first responders

“Before the James Zadroga Health and Compensation Act that we got passed in 2010, you had to rely on workmen’s comp, social security, disability, or your pensions, or your health insurance.”

“When we got the bill passed December 22, 2010, the first words out of my mouth were, ‘This bill is not perfect.’ On a scale from one to ten I’ll give it a six. But a six is better than nothing and that six is helping people. Yesterday, we just introduced legislation to extend this bill 25 more years. This six can go to a seven or an eight if we can get this done.

“But you know, the first time around it took eight years to walk the halls of Congress to get this bill passed. And now we are going to have an uphill fight against Congress. Because everyone in this country — no matter what the issue is — everybody knows that Congress doesn’t really like to pass bills lately.”

“I feel so bad for those who haven’t got the closure from finding loved ones or not being able to find remains or the DNA.”

“We were on that pile looking for them. It was so hard to go in and out of Ground Zero and having a family member come up to you and say, ‘Did you find my loved one? Can you help me?’ And you come out of there and they are waiting for an answer.”

Can you be certain that when home alone and unobserved, you don’t engage in activities that you would prefer did not go public? Watching others that portray some of these activities, may make you think twice about how you would appear. Try using a mirror for a better look. Here is a list of possibilities of what s0me may be doing while unobserved. ...