Are Artificial Sweeteners Linked To Diabetes And Obesity? 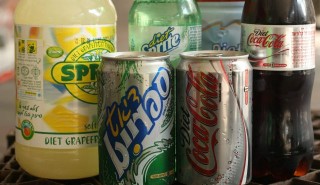 Are Artificial Sweeteners Linked To Diabetes And Obesity?

Using artificial sweeteners can increase the probability of developing diabetes, researchers at the Weizmann Institute of Science in Israel announced on Wednesday. Ironically, consuming these chemical sweeteners – though common among dieters – has been associated with obesity too.

“Our research findings attest that consuming artificial sweeteners causes the development of the very health problems they’re supposed to prevent,” said Dr Eran Elinav, co-leader of the study, which was published in Nature on Wednesday. “Our findings beg reconsideration of the massive, unregulated use of these substances.”

Artificial sweeteners are found everywhere, from “diet” drinks to foods, and are used by diabetics who miss that sweet taste but for whom sugar is poison. But in the Nature paper, the scientific team reports that their use can actually enhance intolerance of glucose and therefore, increase the odds (among adults) of diabetes, or other metabolic conditions.

The odds of these things happening turn out to be a function of the bacteria in your guts.

Eran Elinav of the Weizmann Immunology Department led the study together with Eran Segal of the Computer Sciences and Applied Mathematics Department. Their scientific collaboration began when they wondered why, anecdotally, people who ate artificial sweeteners in order to lose weight actually wound up fatter.

What they found is that while artificial sweeteners don’t contain glucose (sugar in its simplest form), they do affect how our bodies process sugar. Somehow, they realized, people who ate artificial sweeteners were prone to developing glucose intolerance, a pre-diabetic state of hyperglycemia. What it means is their bodies are losing the ability to handle sugar.

As happens, the scientists used mice to study the effect of artificial sweeteners. The rodents were fed water into which three commonly used sweeteners were dissolved, in amounts that fell within U.S. Food & Drug Administration guidelines for daily consumption. In other words, the mice weren’t stuffed with the gook.

Yet these unhappy murines developed greater glucose intolerance than did the control population – mice that had been drinking water diluted with sugar. Repeating the experiments with different types of mice and different concentrations of the sweeteners had much the same results.

You call that food?
The thing is, our intestines don’t even absorb artificial sweeteners. So the scientists wondered whether the bacteria living in our guts were implicated. Intestinal bacteria respond to substances like artificial sweeteners that the body might not identify as “food,” they explain.

This wasn’t difficult: the mice were given antibiotics that wiped out their gut bacteria. And lo, though fed artificial sweeteners, none developed glucose intolerance.

When the scientists took gut bacteria from mice who had eaten artificial sweeteners, and “transplanted” them into the intestines of so-called “sterile” mice with zero bacteria in their environments or their little insides – the tiny beasts developed glucose intolerance.

And thus the Weizmann team linked changes in our gut’s microbiota directly to the bad effects of eating artificial sweeteners.

They also found that exposure to artificial sweeteners causes significant changes in the population of bacteria and in their functioning in our insides. The results of this bacterial monkeying can include obesity, diabetes, and other metabolic conditions, they explain.

How to give yourself glucose intolerance in a week

So far, thus mice. What about you?

Elinav, Segal and the team looked at data collected through a program they’re leading, Personal Nutrition – the biggest of its kind in the world looking at the correlation between intestinal bacteria populations and nutrition. Then they asked volunteers who normally eschewed artificial sweeteners to consume them throughout a week.

During that week, they sampled the glucose levels in the blood of the volunteers, and also the bacterial populations in their intestines. (You know how.)

They found that many of the volunteers – though not all – began to develop glucose intolerance, after just one week of eating artificial sweeteners.

“The relationships we have with our personal gut bacteria is significant to understanding how the food we eat affects us, and our tendency to develop conditions such as obesity and diabetes,” said Elinav in a statement.

Could Too Little Sleep Cause Brain Deterioration?

Not sleeping enough and not sleeping well is not OK. As a matter of fact, there is quite a price to pay. It may surprise you to learn that chronic sleep deprivation, for whatever reason, significantly affects your health, performance, safety, and pocketbook. There are many causes of sleep deprivation. The stresses of daily life may intrude upon our ...