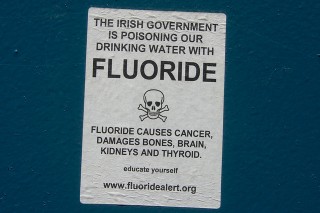 Whether or not to fluoridate our water supplies has been an ongoing debate. But there has been some progress. At  a recent Dallas city council meeting, three  of the 15 council members actually agreed that it was time to open up an honest discussion, and take a closer look at the city’s water fluoridation practices. Read Dr. Mercola’s summary of the promising events to date.

In 2006, researchers from Harvard School of Public Health and Icahn School of Medicine at Mount Sinai did a systematic review and identified five industrial chemicals as developmental neurotoxicants.

This included unquestionable poisons like lead, methylmercury, polychlorinated biphenyls, arsenic, and toluene. Since then, they’ve documented six additional developmental neurotoxicants and have added them to the list of what are now 11 known industrial chemicals that harm brain development in human fetuses and infants.3

One of the recently added neurotoxicants is fluoride, and one of the study’s authors has previously said:4

“Fluoride seems to fit in with lead, mercury, and other poisons that cause chemical brain drain… The effect of each toxicant may seem small, but the combined damage on a population scale can be serious, especially because the brain power of the next generation is crucial to all of us.”

The debate over the dangers of fluoride has been ongoing for more than six decades, despite the fact that study after study has confirmed that fluoride is a dangerous, toxic poison that bio-accumulates in your body while being ineffective at preventing dental decay.

One particularly striking animal study published in 1995 showed that fluoride ingestion had a profound influence on the animals’ brains and altered behavior. Pregnant rats given fluoride produced hyperactive offspring. And animals given fluoride after birth became apathetic, lethargic “couch potatoes.”7 As was reported by the Dallas Observer, brain damage is far more difficult to detect than outwardly physical damage, which perhaps is part of the reason why fluoride continues to slip by under the radar:

“One problem is that compared with gross physical birth defects caused by chemicals, developmental brain damage is barely on public health radar, according to the [Lancet study] authors. They say: ‘David P. Rall, former director of the U.S. National Institute of Environmental Health Sciences, once noted that, ‘if thalidomide had caused a 10-point loss of I.Q. instead of obvious birth defects of the limbs, it would probably still be on the market.”“

More Americans are wising up to the risks of water fluoridation, and they’re using their votes to keep this fertilizer-industry byproduct out of their drinking water (the fluoride added to municipal water supplies is a toxic byproduct from the fertilizer industry—a rarely discussed fact!). Since 2009, about 130 communities have stopped water fluoridation. Canada has dropped from about 60 percent of the population drinking fluoridated water down to about 32-33 percent. Victories have also been logged in Australia, Israel, New Zealand and across the US. The latest fluoride-free victories include:9

1. Wellington, Florida: After hours of debate and testimony from medical experts and residents, council members voted to end 14 years of fluoridation. A number of pro-fluoride dentists are unfortunately working to overturn the council’s vote, but it’s still a victory for now.

2. Amherst County, Virginia: The Service Authority Board voted to discontinue fluoridation because of conflicting opinions on what constitutes “optimal” levels of fluoride. According to the Fluoride Action Network (FAN), “Several Board Supervisors felt that the additive was unnecessary and a waste of resources.”

3. Wood Village, Oregon: The Woodsville City Council was considering adding fluoride to the city’s drinking water, but after polling residents found that 100% of respondents were against it. They have since ended their fluoridation discussions.

4. Sebastopol, California: City Councilors voted unanimously against fluoridation in Sonoma County because of concerns the fluoride could leach into their groundwater from surrounding communities, putting residents at risk.

5. Bantry, Ireland: Town Councilors voted unanimously in favor of a resolution calling for an immediate end to fluoridation throughout Ireland. Two other towns–Skibbereen and Clonakitty–also passed similar resolutions in 2013. Support for this historic vote was provided by the local group West Cork Fluoride Free.

6. Boyne City, Michigan: In early May 2014, city commissioners voted 3-2 to end more than 40 years of fluoridation for the town’s approximately 4,000 residents. Commissioner Gene Towne summed up the council’s decision, saying: “It comes down to choice. I don’t see how you can control the dosage (of fluoride that people ingest) if it’s in everything. If there’s a chance that it could cause any health problems… this should all come down to your choice.”

7. Buffalo and Union, Missouri: In May 2014, Alderman voted to end a decade of fluoridation, saying the additive damaged equipment, city trucks, and was not economical. Also in May, councilors in Union, Missouri voted 7-1 to end fluoridation after the city’s public service committee recommended the city not repair fluoride injection equipment destroyed by the corrosive additive. According to the City Engineer, “It’s an acid and it eats the pipes. Employees are handling it and they don’t want to be.”

8. Legal community interest in the long-smoldering controversy over use of fluorides is growing as the U.S. Court of Appeals for the Fourth Circuit has agreed to hear oral arguments in the fluoride harm case of Nemphos versus Nestle Waters North America, Inc., et al.

The case centers around “dental fluorosis” disfigurement of teeth caused by childhood ingestion of fluorides in water and other products.

According to the authors, “Available evidence suggests that fluoride has a potential to cause major adverse human health problems, while having only a modest dental caries prevention effect. As part of efforts to reduce hazardous fluoride ingestion, the practice of artificial water fluoridation should be reconsidered globally, while industrial safety measures need to be tightened in order to reduce unethical discharge of fluoride compounds into the environment… coordinated global efforts to reduce adverse human health effects on fluoride need to start with ensuring that its introduction into water supplies is prohibited.“

Additionally, in May 2014 the Irish Medical News published an excellent letter from Dr. Neville Wilson of the Leinster Clinic in Maynooth, titled, “We Must Question Mass Medication Without ‘Benefit.” In this letter Dr. Wilson asks a question that is being ignored by many thousands of doctors in the US and other fluoridated countries:

“Where is the physician who will impose a lifelong prescription for an untested potentially toxic substance, without proven clinical benefit, on a patient he/she has never met, interviewed or examined? Such dubious behavior would extract appropriate censure from the licensing authority of the physician involved, on the basis that it is unscientific, unscrupulous, unethical, and therefore unacceptable.”

Water Fluoridation Is the Height of Arrogance

Retired Chemistry Professor Paul Connett, director of the Fluoride Action Network, has made a strong case for why dentistry should be done in the dental office… not via your water supply. He stated:

“Organized dentistry, which includes the American Dental Association, the Oral Health Division of the Centers for Disease Control and Prevention and state dental directors, is the only health profession that seeks to deliver its services via the public’s water supply. The practice of artificial water fluoridation is the height of arrogance when one considers the following undisputed facts and scientifically supported arguments.”
Dr. Connett, who co-authored the book The Case Against Fluoride, is recognized worldwide as a leader in the movement to eliminate fluoride from municipal water supplies, and I’m pleased to be working with him to achieve this goal. He recently compiled a comprehensive and eye-opening list of reasons why water fluoridation must be challenged. Here are some of the highlights:11

It’s Time to Stop the Archaic Practice of Water Fluoridation

Dr. Connett notes that if you shift the IQ of an entire population downward by just five IQ points, you would halve the number of geniuses in society, and you would double the number of mentally handicapped. To lose half of your brightest individuals, and double the number of people who needs special services certainly has enormous social and economic ramifications for a country like the US in the global economy.
The only real solution is to stop the archaic practice of water fluoridation in the first place. Fortunately, the Fluoride Action Network has a game plan to END water fluoridation, both in the US and Canada. Clean pure water is a prerequisite to optimal health. Industrial chemicals, drugs, and other toxic additives really have no place in our water supplies.


In this timely and important book, Dr. Paul Connett, Dr. James Beck, and Dr. H. Spedding Micklem take a new look at the science behind water fluoridation and argue that just because the dental and medical establishments endorse a public health measure, doesn’t mean it’s safe.

You can reference more background at www.fitnessandhealthyliving.com/what-is-the-truth-about-fluoride-hazards/

What Are The Top 5 Doctor-Recommended Weight Loss Plans?

Losing weight is one of the most sought after goals. Unfortunately, not everyone can succeed in keeping it off after losing it. There are many programs on the market. Rather that keep trying one after another, a better approuch is to try only the most successful and recommended by professionals. This article should prove very helpful. Below are the ...