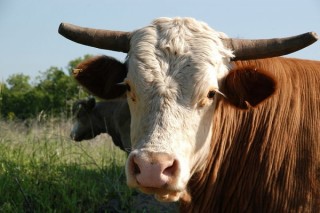 The U.S. Department of Agriculture is preparing to release the latest version of the government’s influential dietary guidelines this year, and there could be a major change that accelerates the trend of Americans eating less meat.

For years the government has been issuing guidelines about healthy eating choices. Now, a panel that advises the Agriculture Department is ready to recommend that you be told not only what foods are better for your own health, but for the environment as well.

That means that when the latest version of the government’s dietary guidelines comes out, it may push even harder than it has in recent years for people to choose more fruits, vegetables, nuts, whole grains and other plant-based foods — at the expense of meat.

Americans, though they are eating less meat than they have in the past, are still fond of steaks, hamburgers, and chicken wings. And the environmental impact of that diet is significant. Carnivores contribute far more to environmental decay than do vegetarians. The livestock industry is responsible for an estimated 15 percent of total global carbon emissions, roughly two-thirds of which is the result of beef production. On a per kilogram basis, the carbon footprint of lamb and beef production is unparalleled. Cattle produce more greenhouse gases, emit more nitrogen pollution, require more water for irrigation and use more land, the study found.

Meat industry advocates have been battling the prospect of lowered meat intake recommendations for decades. But those battles have largely been waged on the nutritional health front, and the evidence is mixed on whether meat is actually harmful to your health. As a result, the government now recommends that people opt for leaner meat, instead of less meat.

Defending meat on environmental grounds, however, could be much tougher for the industry. Several international and government agencies,including the United Nations, have spelled out the meat industry’s massive footprint. And now the USDA could be next with new, government-backed dietary guidelines.

For that reason, several industry players have responded critically to the consideration, both attacking the notion that meat production is environmentally unfriendly and discrediting the idea that environmental concerns should influence the dietary guidelines issued by the government. The North American Meat Institute (NAMI) and National Cattlemen’s Beef Association have each issued statements insisting that lean meat should be part of healthy diets and denouncing any suggestion that environmental impact should dictate the recommendations.

“The Dietary Guidelines Advisory Committee’s focus on sustainability is objectionable because it is not within the committee’s expertise,” NAMI said in a statement.

Many members of Congress have also let their objections be known.  In part of the massive spending bill enacted last month it was noted about the committee’s interest in including the environment as part of the nutrition guide and directed Agriculture Secretary Tom Vilsack “to only include nutrition and dietary information, not extraneous factors” in final guidelines.

The new focus would mean asking people to choose more fruits, vegetables, nuts, whole grains and other plant-based foods at the possible expense of meat.

A draft of the government panel’s advice, which was released last month, calls for the consumption of more plant-based foods and less animal-based ones, because it’s “associated with lesser environmental impact than is the current average U.S. diet.” Specifically, the draft advises less “red meats” and “processed meats.”

“Americans don’t necessarily heed dietary recommendations,” said Janet Riley, the senior vice president of public affairs for the North American Meat Institute. “But where this could have a huge impact is on purchasing programs. The federal feeding programs are significantly impacted by the federal dietary guidelines.”

Indeed, the immediate impacts would be substantial. Reducing the recommended amount of meat consumption would reduce, among other things, the amount of meat the industry provides as part of the school lunch program. And overnight, the diets of millions of Americans would have less meat.

“We need to make sure our diets are in alignment with our natural resources and the need to reduce climate change,” says Kari Hamerschlag of the advocacy group Friends of the Earth.

Michael Jacobson of the Center for Science in the Public Interest says the idea of broader guidelines isn’t unprecedented. They have already been shaped to address physical activity and food safety, he says.

“You don’t want to recommend a diet that is going to poison the planet.”

In a recent study by the journal Proceedings of the National Academy of Sciences, beef was found to be more harmful to the environment than other meat industries, including pork and chicken. According to the study, when compared with other popular animal proteins, beef produces more heat-trapping gases per calorie, puts out more water-polluting nitrogen, takes more water for irrigation and uses more land.

Are Some Diabetes Treatments Going Too Far?

The management of older adults with type 2 diabetes requires careful consideration of the effects that advancing age and changes in health status can have on the competing risks and benefits of therapeutic interventions. Physicians may vary in their approaches, which may be influenced by past patient experience or simply ot of the book medical training. ...