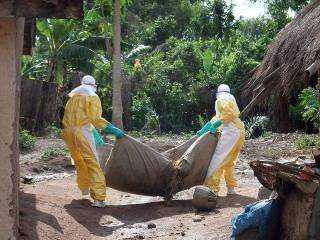 Ebola virus disease (EVD) or Ebola hemorrhagic fever (EHF) is a disease of humans and other primates caused by an ebolavirus. Symptoms start two days to three weeks after contracting the virus, with a fever, sore throat, muscle pain and headaches. Typically, vomiting, diarrhea and rash follow, along with decreased functioning of the liver and kidneys. Around this time, affected people may begin to bleed both within the body and externally.

The virus may be acquired upon contact with blood or bodily fluids of an infected animal or person. Spreading through the air has not been documented in the natural environment. Fruit bats are believed to carry and spread the virus without being affected. Once human infection occurs, the disease may spread between people, as well. Male survivors may be able to transmit the disease via semen for nearly two months. To make the diagnosis, typically other diseases with similar symptoms such as malaria, cholera and other viral hemorrhagic fevers are first excluded. To confirm the diagnosis, blood samples are tested for viral antibodies, viral RNA, or the virus itself.

For the third time in the history of the US Centers for Disease Control and Prevention (CDC), the agency has raised its level of emergency alertness to “Level 1″—this time in response to the Ebola virus, following outbreaks in West Africa.

CDC Level 1 emergency response, reserved for the most dire health emergencies, was declared for the first time in 2005 following Hurricane Katrina, and again in 2009 for the H1N1 influenza outbreak.

The outbreak began late last year. Affected areas include Guinea, Sierra Leone, and Liberia. At the time of this writing, of the 1,711 people infected 932 have died in these three areas. Nine people have also been diagnosed with the disease in Nigeria.

While the death rate for Ebola can be upwards of 90 percent, the current outbreak has a death rate of about 55 percent.

Two American aid workers, Dr. Kent Brantly and Nancy Writebol, have contracted the disease, and have been flown back for treatment in the US, aboard a specially-equipped plane. At least one of the victims is being treated at the Emory University Hospital in Atlanta, Georgia.

The current outbreak involves Zaire ebolavirus, which produces symptoms within six to 16 days of infection. The virus leads to severe immunosuppression, but most deaths are attributed to dehydration caused by gastric problems. Early signs of infection include:

As the infection sets in, shock, cerebral edema (fluid on the brain), coagulation disorders, and secondary bacterial infections may occur. Hemorrhaging tends to begin four to five days after onset of the initial symptoms, which includes bleeding in the throat, gums, lips, and vagina. Vomiting blood, excreting tar-like feces indicative of gastrointestinal bleeding, and liver and/or multi-organ failure can also occur.

No specific treatment for the disease is yet available. Efforts are under way to develop a vaccine; however, none yet exists.

Watch this video where an amazed young school girl did indeed get punished for saying “Bless You” when a fellow student sneezed. https://www.youtube.com/watch?v=Od6JiO43KBQ Published on Aug 20, 2014 We’re now hearing from a Dyer County High School student who says she was kicked out of class for saying “bless you.” Kendra ...