Are You Drinking From Your Garden Hose? 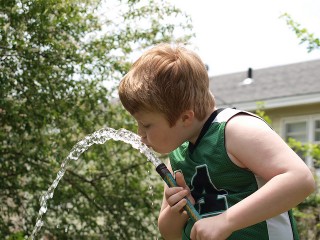 Dr. Mercola warns: You can’t do this anymore – water from a hose is no good no more! You have much more than water coming out – some of it potentially deadly. Excerpts of the warning are below.

Do you have childhood memories of playing outside during the summer and taking cool drinks of water from the garden hose? Many people do, and most parents probably think nothing of it, but it’s vitally important that you avoid drinking out of the hose.

In fact, if you look closely, you’ll see a warning label on most garden hoses warning you against just that. The reason? Being that garden hoses are not intended for drinking water, there are no regulations about what kinds of chemicals can be in them.

And as you might suspect, most garden hoses are far from natural. Instead, they’re primarily composed of toxic hormone-disrupting chemicals that may harm your health in numerous ways.

What’s Your Garden Hose Made Of?

One-third of the hoses tested contained high levels of one or more chemicals of concern, and more than half (67 percent) were made of PVC. PVC is a significant source of exposure to chemicals known as phthalates, which are used as plasticizers.

The total phthalate content of the hoses ranged from 11 percent to 18 percent by weight, and all of those made from PVC that were tested for phthalates contained one or more chemicals banned for use in children’s products by the Consumer Product Safety Commission (CPSC).

Phthalates are one of the groups of “gender-bending” chemicals causing males of all species to become more female. These chemicals have disrupted the endocrine systems of wildlife, causing testicular cancer, genital deformations, low sperm counts, and infertility in a number of species, including polar bears, deer, whales, and otters, just to name a few.

Scientists believe phthalates are responsible for a similar pattern in humans as well. A significant portion of the hoses (4.5 percent) also contained brominated flame retardants. Polybrominated diphenyl ethers (PBDEs) resemble the molecular structure of PCBs, which have been linked to cancer, reproductive problems, and impaired fetal brain development.

Higher exposures to PBDEs have been linked to decreased fertility,2 which could be, in part, because the chemicals may mimic and therefore disrupt your thyroid hormones. Research has suggested PBDEs can lead to decreases in TSH (thyroid-stimulating hormone).3

When present with normal T4 levels, low TSH is typically a sign that your thyroid is being disrupted and you are developing hyperthyroidism, which can have significant ramifications both for you and your unborn child if you’re pregnant.

As for cancer, one type of PBDE — decaBDE — is also classified as a possible human carcinogen by the US Environmental Protection Agency (EPA), while the others remain largely untested. Other concerning chemicals found in garden hoses include:


We frequently hear that a substance we’ve relied on for years turns out to have serious effects on our health, the environment, or both. After coming to terms with the fact that the autism and cancer which had impacted her family were most likely the result of environmental toxins, author Deanna Duke undertook a mission to dramatically reduce her family’s chemical exposure. Check out her story below.

Many people are careful about their sugar intake. This is no surprise, given the epidemic proportions of rising type 2 diabetes statistics. Doctors have encouraged the use of artificial sweeteners to replace sugar, but these products have brought their own problems. Much has been brought to light about the dangers accompanying aspartame use. Now, ...