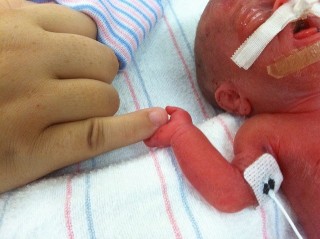 Women who are poor experience higher cortisol levels in pregnancy and give birth to infants with elevated levels of the stress hormone, putting them at greater risk for serious disease later in life, according to a new research from the University of Colorado Denver.

The study, published online recently in the American Journal of Human Biology, is the first to measure cortisol in infants and relate it directly to the socioeconomic status of their mothers during pregnancy.

“There have been several studies relating cortisol levels in teenagers and adults to socioeconomic status, but this is the first to look at this relationship among pregnant women and their babies,” said study author Zaneta Thayer, PhD, assistant professor of anthropology at CU Denver, a major center of timely, topical and relevant research. “The results offer new insights into how health disparities can be inherited across generations.”

Cortisol is a stress hormone produced by the hypothalamic pituitary adrenal (HPA)-axis which, if overproduced, can contribute to a host of chronic ailments including cardiovascular disease and mental illness.

In her study of 64 pregnant females in New Zealand, Thayer found that poor women had higher cortisol levels during pregnancy and gave birth to infants with elevated cortisol responses to stress.

“The babies of lower socioeconomic mothers had higher cortisol response to the stress of the vaccination,” Thayer said. “Such changes have elsewhere been associated with differences in cognition, temperament and physical health.”

Stress hormone cortisol is produced by the hypothalamic pituitary adrenal axis. If this is overproduced it can trigger a group of chronic ailments that include cardiovascular disease and mental illness.

“Our findings suggest that stressful social environments experienced by a mother impact her offspring…and that this is already detectable in the first weeks after birth,” the study said. “These findings point to an early origin in social disparity-based differences in biological function.”

Just published research data in the American Journal of Clinical Nutrition has challenged the long standing notion that eating or skipping breakfast can be used to control weight loss. However, the critics of the recently published study point out that the study published was done for a short period of time and to analyze the changes of internal health ...