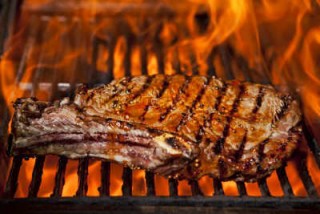 Researchers are reporting that the very same beer that many people enjoy at backyard barbeques could, when used as a marinade, help reduce the formation of potentially harmful substances in grilled meats. The study appears in ACS’ Journal of Agricultural and Food Chemistry.

I.M.P.L.V.O. Ferreira and colleagues explain that past studies have shown an association between consumption of grilled meats and a high incidence of colorectal cancer. Polycyclic aromatic hydrocarbons (PAHs) are substances that can form when meats are cooked at very high temperatures, like on a backyard grill. And high levels of PAHs, which are also in cigarette smoke and car exhaust, are associated with cancers in laboratory animals, although it’s uncertain if that’s true for people. Nevertheless, the European Union Commission Regulation has established the most suitable indicators for the occurrence and carcinogenic potency of PAHs in food and attributed maximum levels for these compounds in foods. Beer, wine or tea marinades can reduce the levels of some potential carcinogens in cooked meat, but little was known about how different beer marinades affect PAH levels, until now.

The researchers grilled samples of pork marinated for four hours in Pilsner beer, non-alcoholic Pilsner beer or a black beer ale, to well-done on a charcoal grill. Black beer had the strongest effect, reducing the levels of eight major PAHs by more than half compared with unmarinated pork. “Thus, the intake of beer marinated meat can be a suitable mitigation strategy,” say the researchers.

Walk into a supermarket and you probably are impressed with how everything looks so fresh and clean. But what possible turn offs or angers can lurk behind this comely facade? Fruit and vegetables are located right near the entrance so the first impression you get is one of health and freshness. Giving the customer the impression that everything is ...