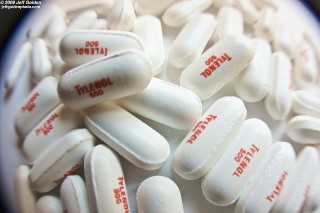 Parents routinely make use of various over the counter remedies for ill children. Adults use these themselves. There are various warnings on the packaging which are usually ignored. Unfortunately, even some physicians routinely recommend these products without sufficient warnings. You generally don’t hear any cautions from from any governmental agencies either. As in everything in life, forewarned is forearmed. Every once and a while some new research comes to light. Read about it here.

Ironically, concern over liver damage has influenced some physicians to change patients over to more addictive Oxycontin to avoid liver damage from long term use of prescribed painkillers that include acetaminophen in their ingredients.

Long term acetaminophen consumption is dangerous even at prescribed low doses. What’s more, at slightly higher-than-recommended dosages over time, acetaminophen can be even more deadly than one massive overdose.

Most of the overdose reports have been accidental, often by using more than one pharmaceutical containing acetaminophen at the same time. Some have been intentionally self-destructive, as in suicidal. But the fact remains: acetaminophen is a liver toxin. Those with liver conditions, such as hepatitis or fatty liver should avoid acetaminophen products completely.

As reported by a Journal of American Medical Association (JAMA) study has determined that taking acetaminophen products even as directed causes liver damage. With all the toxins in our environment that our livers and kidneys need to handle, we don’t need to damage either.

Recently, it’s been discovered that mixing alcohol with acetaminophen pharmaceuticals could be even more disastrous. That includes taking Tylenol or Excedrin to remedy hangover headaches the day after drinking too much. Not only is this a whammy on the liver, it can also induce kidney disease.