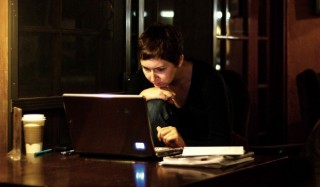 You would think that long periods of time spent staring at a computer screen would be harmful to eyesight. Optometrist James Sheedy has put the issue to rest in the following post.

Optometrist James Sheedy says while staring at a computer screen for long hours can cause eye strain, it does not worsen vision. (Kevin McShane/Flickr)

A study out of Australia finds that adults spend more time in front of a screen than they do sleeping. The 1,500 people surveyed spent an average of nine hours per day in front of a television or computer.

What effect does that much screen time have on the eyes? Here & Now’s Jeremy Hobson asks Dr. James Sheedy, who says long hours spent staring at a screen with poor lighting around the screen can cause eye strain, but computers themselves do not worsen vision.

Mississippi teenager Sarah Kavanagh launched the Change.org petitions to remove BVO from Gatorade and Powerade. (Change.org) Coca-Cola has decided to change the formula of several of its beverages by removing the controversial ingredient brominated vegetable oil (BVO). The move comes after a petition on Change.org by Mississippi teenager Sarah Kavanagh, ...