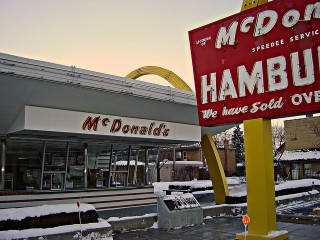 Fast food burgers, fries, chicken nuggets. and other greasy fare, might be popular with kids, but it’s not good for their waistlines — and now it turns out, it will affect how students perform in school, according to a new study led by an Ohio State University professor.

Fast food has long been linked to obesity, but a new study suggests that it may also affect children’s educational achievement.

A new study published in the journal Clinical Pediatrics found a link between children’s low test scores and the amount of fast food they eat.

“Researchers found that the more frequently children reported eating fast food in fifth grade, the lower their growth in reading, math and science test scores by the time they reached eighth grade,” said a press release.

Students who consumed the most fast food had test score gains that were up to 20 percent lower than students who didn’t eat any fast food, the study found. Kelly Purtell, lead author of the study and a professor at Ohio State University, said in a statement.

There’s a lot of evidence that fast-food consumption is linked to childhood obesity, but the problems don’t end there. Relying too much on fast food could hurt how well children do in the classroom.

Children who reported eating fast food at least four to six times a week had 20 percent lower gains in test scores in all three subjects than kids who did not eat fast food on a regular basis.

Children who reported eating fast food 1 to 3 times a week performed about as well as their peers in reading and science but had slower academic growth in math.

Although the study doesn’t prove that eating fast food on a routine basis is the actual cause of lower test scores for kids, the study results suggest a strong connection.

“The results of the study did not change, even when the researchers took into account school quality and socioeconomic status, as well as how often each child watched television and how regularly they exercised,” PBS said.

The implications of the study seem clear:

But other studies have shown that fast food lacks certain nutrients, especially iron, that help cognitive development. In addition, diets high in fat and sugar – similar to fast-food meals – have been shown to hurt immediate memory and learning processes.

“Fast food is really pervasive right now, and there are a lot of reasons why kids eat it and why families use it,” Purtell said. Because of this, Purtell said, “we have to think broadly about lots of different ways to make families not be reliant on fast food.”
article sources: http://www.moneytalksnews.com/new-study-suggests-that-fast-food-hinders-kids-learning/
http://cpj.sagepub.com/content/early/2014/12/04/0009922814561742.abstract
photo source: Flickr/Mary Anne Enriquez https://www.flickr.com/photos/urbanwoodswalker/5330284629/

Dr. Mercola reveals the latest research on this ongoing debate. There really shouldn’t be any debate at all. The evidence is convincing and conclusive. Wireless phones and other gadgets have the potential to cause all sorts of health problems, from headaches to brain tumors. The link between brain cancer and cell phone use has been a particularly ...