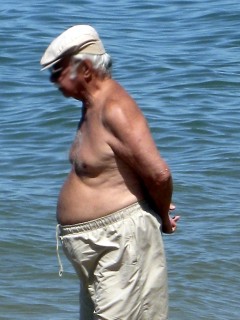 It is hard to believe that there is any advantage in having extra pounds. But it seems that when you consider that weight itself may not be the problem – it is how much – then the results below will make some sense.

This may be the best news you read all day: Heavier seniors live longer than those of normal weight. That’s the word from researchers at Deakin University in Melbourne, Australia, who examined the relationship between body mass index (BMI) and the risk of death in men and women age 65 and older. And they found that those with a BMI of 27.5, which is considered overweight, had the lowest risk of death. Oddly, the risk of death increased “significantly” among those with a BMI between 22 and 23, which is normal weight. (Body mass index is a measure of weight in relation to height.)
What does this mean? “It is time to reassess the healthy weight guidelines for older people,” said study leader Caryl Nowson, a professor of nutrition and aging. “Our results showed that those over the age of 65 with a BMI of between 23 and 33 lived longer, indicating that the ideal body weight for older people is significantly higher than the recommended 18.5 to 25 ‘normal’ healthy weight range.”

The study: The research team reviewed studies published between 1990 and 2013 that reported on BMI and death risk in people 65 years and older. These studies followed 200,000 people over a 12-year period.

• 19 percent when BMI was between 20 and 20.9, which is still considered within normal range.

The takeaway: Despite this study, cardiovascular and cancer risks are still higher for those who are obese or overweight. But instead of worrying too much about body weight, seniors should focus on living a healthy life, including eating a balanced diet, exercising regularly and not smoking.

The study findings were published in the American Journal of Clinical Nutrition.

Anything by Bragg’s is pure gold

Love this book. Very in-depth. Covers more than just breathing; this book is about a lifestyle change to better your health. I’ve personally written a book on breathing that is for singing, and I am working on another breathing book for over-all health. Once that book is finished I will definitely be mentioning Bragg’s Super Power Breathing in my liner notes as a must-read for fans of my writings. If you want to improve your quality of health and quality of life, check out the entire Bragg’s line…Start with this book and you’ll be happy:)

How Can You Create a Life of Well-Being?

It isn’t often that a successful entrepreneur comes forward with a practical method to achieve that ever elusive state of mind know as “well being”. Especially when the author has used the method successfully themselve. Read on about Arianna Huffington, who has done both. How would you like to thrive, be successful, and create a ...