Can Heavy Drinking Damage Your Lungs And Liver? 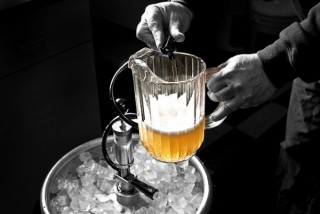 In a study on rats, published in the American Journal of Respiratory Cell and Molecular Biology titled “Chronic Alcohol Ingestion in Rats Alters Lung Metabolism, Promotes Lipid Accumulation, and Impairs Alveolar Macrophage Functions”, scientists were able to link heavy drinking to liver failure and a greater risk of developing pneumonia and life threatening acute respiratory distress syndrome. This susceptibility is partially due to the fact that the immune system in the lung is no longer strong enough to protect from infection.

It’s no surprise that heavy drinking can hurt your health. Now, scientists have found out the reason why alcoholics are more susceptible to lung infections; a build-up of fat could be to blame for immune system failure.

When people drink, liver cells actually begin to produce fat-possibly as a defense mechanism against the toxicity of alcohol. Over extended and frequent alcohol exposure, this fat accumulates and can cause “fatty liver disease,” which can eventually lead to liver failure. Yet lungs also contain a subpopulation of cells that contain fat, and this is where the problems continue.

“We call it the alcoholic fatty lung,” said Ross Summer, one of the researchers, in a news release. “The fat accumulation in the lungs mimics the process that causes fat to build up and destroy the liver of alcoholics.”

In fact, the scientists found that rats who were exposed to alcohol for an extended period had fatty buildup in their lungs. Surfactant producing cells expel a fatty secretion onto the inner lining of the lung to keep air passages lubricated. These secretions increased after extended alcohol exposure. In addition, the scientists also noticed fat buildup in lung macrophages, which are immune cells that normally engulf and digest bacteria or sick cells in the lung.

“It’s likely that the macrophages try to engulf the excess fat in order to protect the cells in the lung, but in doing so, they become less effective sentinels against infection and disease,” said Summer.

The findings reveal a bit more about how alcohol can impact a drinker. Currently, scientists hope to see whether or not the same process occurs in humans. If so, lipid lowering drugs could help treat alcohol-related pneumonia in the future.

The general concerns about US healthcare are about quality and cost. We need to take stock every once in a while and see where improvements can be made. An article in (MedPage Today) — concludes that Healthcare costs in the U.S. remain the highest per person, but expenditure growth has slowed in the past decade, bringing the nation’s ...