Can Peanuts Help You Improve Your Heart Health? 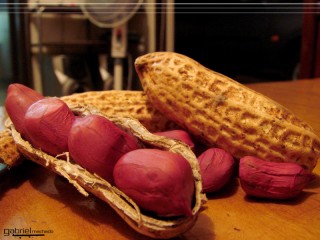 Peanuts Might Reduce Risk Of Death From Heart Disease: Study

As long as you’re not allergic, you may want to consider adding peanuts to your diet. Scientists have found that eating peanuts may be a simple way to lower your risk of dying from a heart attack.

In a study published in the prestigious Journal of the American Medical Association, found that men and women who regularly ate peanuts were less likely to die or develop potentially fatal cardiovascular problems.

Researchers from Vanderbilt University and the Shanghai Cancer Institute observed over 70,000 low-income white and black Americans in addition to roughly 130,000 Chinese residents of Shanghai over the course of between five and 12 years. Those who ate peanuts reduced their risk of dying from cardiovascular disease by between 23 and 38 percent. Their overall mortality rates had decreased significantly as well.

Senior author Xiao-Ou Shu, an associate director for Global Health at the Vanderbilt-Ingram Cancer Center (VICC), said: We found that peanut consumption was associated with reduced total mortality and cardiovascular disease mortality in a predominantly low-income black and white population in the US, and among Chinese men and women living in Shanghai.

The peanut-eating participants could most likely attribute their good health to the high amounts of unsaturated fat, fiber, vitamins and antioxidants found in peanuts. Just 30 grams of peanuts need to be eaten a week to see improvements in one’s cardiovascular system, Yahoo! News reports. Peanuts are affordable and available all over the world, so researchers have labeled them as one of the most inexpensive ways to increase your lifespan.

Co-author William Blot made sure to note, however, that this study only used data from questionnaires as opposed to clinical experiments, according to Time, so the team could not conclude that peanuts were the main reason the participants were so much healthier. Blot, who is also associate director for cancer prevention control and population-based research at VICC, said. The findings from this new study, however, reinforce earlier research suggesting health benefits from eating nuts, and thus are quite encouraging. Researchers also warned against eating large amounts of salted peanuts because of their high calorie count. The findings come not too long after another study determined that peanuts may be the best way to prevent children from developing allergies to the nutritious legumes.

Click here and here to check further, From an article at Elite Daily.

Is There Such A Thing As A Fasting Diet?