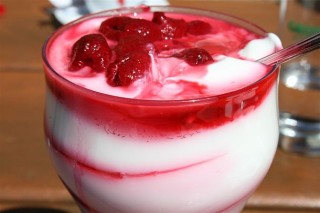 Yogurt is a favorite among many, especially the flavored kinds. There is much to criticize with respect to the added sugars but never the less the beneficial bacteria contribute much to gut and immune system health. This study adds a new and very important dimension to the role eating yogurt (hopefully you use the plain or make your own).

The study involved over 540 participants assigned to take probiotics for a period of at least eight weeks. At the end of the time, those who’d been on probiotics had small reductions in both systolic and diastolic blood pressure. The study was based on data from nine high-quality studies that looked at the link between probiotic intake and blood pressure.

The reduction was greatest in people who had the higher readings to begin with. Researchers found that people whose blood pressure was equal or greater than 130/85, which is considered elevated, benefitted the most from probiotic consumption. And probiotics  different types of bacteria of bacteria seemed to offer more benefit than those containing just one. The effect didn’t seem to exist if people consumed probiotics for less than eight weeks, which suggests the blood pressure-reducing effects may only be noticeable after a couple of months.

“The small collection of studies we looked at suggest regular consumption of probiotics can be part of a healthy lifestyle to help reduce high blood pressure, as well as maintain healthy blood pressure levels,” said study author Jing Sun. “This includes probiotics in yogurt, fermented and sour milk and cheese, and probiotic supplements.”

“We believe probiotics might help lower blood pressure by having other positive effects on health,” said Sun, “including improving total cholesterol and low-density lipoprotein, or LDL, cholesterol; reducing blood glucose and insulin resistance; and by helping to regulate the hormone system that regulates blood pressure and fluid balance.”

Previous research showed that a similarly small drop in blood pressure was linked to a 22% reduction in the risk of death from heart disease, heart attack, and stroke.

Other studies using yogurt in general, have pointed to alleviating symptoms of depression and in chronic fatigue syndrome. Such benefits may be related to the anti-inflammatory actions of the probiotics.

The United States Court of Appeals for the District of Columbia Circuit, known informally as the D.C. Circuit, is pictured in Washington, D.C. (Wikimedia Commons) President Barack Obama’s health care law is enmeshed in another big legal battle after two federal appeals courts issued contradictory rulings on a key financing issue within hours of ...