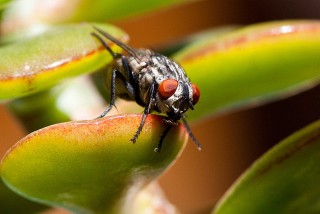 A new and almost unbelievable concept – Sense of taste affecting length of life!

Call it the ultimate taste test. Taste buds may have a powerful role in promoting a long and healthy life–at least for fruit flies, according to the first detailed look into the role of taste perception. Researchers from the University of Michigan, Wayne State University and Friedrich Miescher Institute for Biomedical Research in Switzerland found that suppressing the fruit fly’s ability to taste its food–no matter how much it actually eats–can significantly increase or decrease its length of life and potentially promote healthy aging.

• Bitter tastes have a negative effect on lifespan.

• Sweet tastes have a positive effect on lifespan.

• Fruit flies that could not taste water lived up to 43 percent longer than flies that could taste it. Why? The loss of taste may cause physiological changes to help the body adapt to the perception that it’s not getting adequate nutrients.

“This brings us further understanding about how sensory perception affects health. It turns out that taste buds are doing more than we think,” says senior author of the University of Michigan-led study Dr. Scott Pletcher. “We know they’re able to help us avoid or be attracted to certain foods, but in fruit flies, it appears that taste may also have a very profound effect on the physiological state and healthy aging.”

What about humans? The research with fruit flies is only the beginning, and future studies will apply this knowledge to health in human beings. Eventually, we could have diets designed for longevity that are individually tailored to favor certain tastes. In addition, pharmaceutical compounds could be created that target taste inputs without altering the diet.

The study findings were published in the Proceedings of the National Academy of Sciences of the United States of America.

We continually hear about the importance of exercise. What we don’t hear often enough about is the danger that can come with lack of exercise. The National Institute of Health estimates that the average adult American spends around 7.7 hours a day engaged in “sedentary behavior.” For many, this will take place at the office. Prolonged ...