Can You Get Punished For Saying “Bless You”? 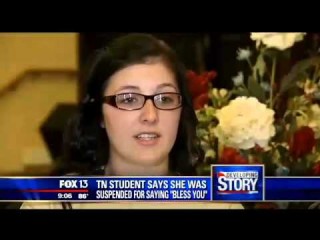 Watch this video where an amazed young school girl did indeed get punished for saying “Bless You” when a fellow student sneezed.

We’re now hearing from a Dyer County High School student who says she was kicked out of class for saying “bless you.” Kendra Turner says she was suspended for responding to a classmate’s sneeze. The student posted on Facebook yesterday that her teacher told her, quoting, “Now we will not have Godly speaking in my class”.

But school leaders say she was given in-school suspension for violating the teacher’s “no talking policy” and causing a disruption in the classroom.
Kendra spoke to Fox 13 this afternoon about what happened.

“My friend sitting next to me sneezed and I said ‘bless you.’ My teacher, she stood up and she asked ‘Who said that?’ I told her I did and she asked why and I said I was being courteous. She said, ‘Who told you it was courtesy?’ I told her that my pastor and my parents taught me it was courtesy to say it and she said ‘This is not your pastor’s classroom.’ I get to the office and one of the administrators said that if I didn’t want to follow my teacher’s rules then maybe I should get my pastor to teach me,” said Kendra.