Can You Live Longer If You Eat This? 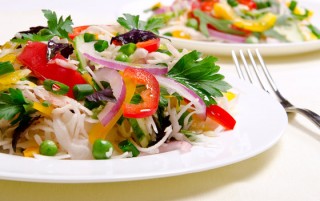 Many will argue that the right food can keep you healthy – but as far as longevity is concerned – it is genetic. The article below brings a study that has indeed linked food to longevity . Read this interesting excerpt.

It’s time to eat your broccoli. And blueberries, apples, carrots and eggplant. The more fresh fruits and vegetables you eat, the longer you are likely to live, according to a large, 12-year study by British researchers.

One diet helps you to live a LOT longer. Bonus: You get to drink wine with dinner.

The study: Led by Oyinlola Oyebode of the department of epidemiology and public health at University College London, the team analyzed the eating habits of more than 65,000 people in England between 2001 and 2013.

• Those who consumed seven or more servings of fresh fruit and/or vegetables a day had a 42 percent lower risk of death at any age, compared with those who ate less than one portion a day.

• Eating five to seven servings a day lowered the risk of death to 36 percent.

• And even those who ate only one to three servings of fruits and veggies a day had a 14 percent lower risk of dying.

• Drinking fruit juice offered no significant health benefit, while canned or frozen fruit actually increased the risk of dying by 17 percent per portion, largely due to the high sugar levels.

“We all know that eating fruit and vegetables is healthy, but the size of the effect is staggering,” Oyebode said in a news release. “Vegetables have a larger effect than fruit, but fruit still makes a real difference. If you’re happy to snack on carrots or other vegetables, then that is a great choice but if you fancy something sweeter, a banana or any fruit will also do you good.”

But do note this important caveat: The study didn’t prove that eating lots of fruits and vegetables can cut your risk of death; instead it found an association between fresh produce consumption and lower death risk.

The study findings were published in the Journal of Epidemiology and Community Health.


Raw Food For Dummies shares reasons for incorporating raw food into your diet and life, tips on how to do it, and includes nearly 100 recipes.

Do You Know The Healthiest Foods to Stock in Your Kitchen Year-Round?

Attaining  optimal health should be your primary goal. Besides exercise and lifestyle – the next major component is diet. Based on studies – and numerous testimonials over the years – we bring you a list of 15 foods that really can represent  ” The Healthiest Foods To Stock in Your Kitchen Year Round. There’s no getting ...