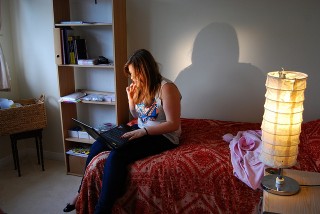 About 1 in 5 adolescents has experienced recent online bullying and cyberbullying, like traditional bullying, can increase the risk of mental health problems in teens as well as the misuse of drugs and alcohol. It is important to understand whether cyberbullying contributes uniquely to mental health and substance use problems independent of its overlap with traditional face-to-face bullying. A recent study suggests that family dinners, could help kids cope with online bullying. Talk time with parents in cars or other settings can also help protect against the effects of cyberbullying, and the teen’s mental health.

Nearly 19 percent of the students reported they had experienced cyberbullying during the previous 12 months. Cyberbullying was associated with all 11 of the internalizing, externalizing and substance use problems. Family dinners appeared to moderate the relationship between cyberbullying and the mental health and substance use problems. For example, with four or more family dinners per week there was about a 4-fold difference in the rates of total problems between no cyberbullying victimization and frequent victimization. When there were no dinners the difference was more than 7-fold.

If you look at this realistically, it’s not just cyberbullying, but it’s a problem with parenting in general. Parents need to spend time with their children, regardless of age. Communicate more and show interest in their well being and development. Show concern and provide council for their problems. Be with them when they are undergoing whatever stress and pain.

Cyberbullying was associated with mental health and substance use problems in adolescents, a new study shows, but family dinners may help protect teens from the consequences of cyberbullying and also be beneficial for their mental health.

The increase in the prevalence of diabetes over the past few decades has coincided with an increase in certain risk factors for diabetes, such as a changing race/ethnicity distribution, an aging population, and a rising obesity prevalence. The mere fact that obesity is related to diabetes should be enough to have Americans watch their weight. Unfortunately, ...