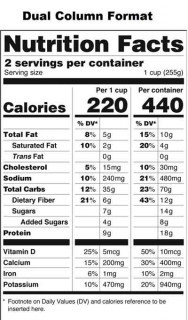 Watch the video above about the proposed Nutrition Label Changes. Important excerpts included below from the original article by Dr. Mercola will explain it more and also alert you to two paragraphs snuck in to the FDA’s 109-page proposal that threatens your access to folate, a B vitamin that is critical for health. and the way for you to register your protest.

Have you ever grabbed a snack, looked at the list of ingredients, and thought, “Oh that’s not so bad,” only to later realize you actually just ate eight times the amount of sugar and calories you thought you were eating?

That’s a problem the US Food and Drug Administration (FDA) says it will now try to correct, by altering the nutritional labels on processed foods.1,2,3 As reported by the Los Angeles Times:4

“Ever notice how an individual bag of chips will list the amount of calories per single serving, but not the amount for the entire bag? Chances are, you’re going to finish the bag, and the new proposed nutrition labels will reflect that, with calorie information for the amount people will realistically eat.”

If it goes through, it’ll be the first time the nutritional label gets a major overhaul. Since the introduction of nutrition facts labels in 1993, the only major change was when declaring trans fat content became a requirement in 2006.

Packaged foods that are typically consumed in one sitting will now have to declare total calories and other nutrient data as one single serving. No more chip bags giving you nutritional data for what amounts to a dozen chip pieces.

Larger packages that could be consumed in either one or multiple sittings will have to bear a “dual column” label, showing the nutrient information “per serving” and “per package,” side-by-side. An FDA mockup of what this new dual column label might look like is shown below.

Other proposed changes include:

Sadly this is a move in the wrong direction. Ideally, there should be a distinction between monounsaturated, saturated, and omega-6 and 3 fats. This would allow you to wisely choose beneficial fats. When seeking to reverse insulin resistance, a helpful strategy is to get anywhere from 50-85 percent of your daily calories in the form of healthful fats, which includes saturated fat but NOT trans fat or processed omega-6 fats.

The FDA will accept public comments for 90 days. You can submit either electronic or written comments on the proposed rules until June 2, 2014. To do so, see the FDA’s Proposed Changes to the Nutrition Facts Label page,5 and select the appropriate Comment Now button in the blue text box.

Once the rule is finalized, food manufacturers will have two years to comply with the new rules. Updating the label is expected to cost food companies around $2 billion.

I also want to alert you to two paragraphs snuck in on page 69 of the FDA’s 109-page proposal that threatens your access to folate, a B vitamin that is critical for health. As reported by Alliance for Natural Health (ANH):6

“It’s a sneak attack so quiet and unobtrusive that few people will even realize it’s there. According to the guidance, the word “folate” will be banned from the Supplement Fact labels —only the term “folic acid” will be allowed.

Folate is the naturally occurring form of the water-soluble vitamin B9. It is found in foods such as black-eyed peas, chickpeas and other beans, lentils, spinach, turnip greens, asparagus, avocado, and broccoli, but is also available as a supplement…Folic acid, on the other hand, is synthetically produced, and refers to just one member of the folate group: pteroylmonoglutamic acid . While folic acid occurs only rarely in whole foods, it’s extremely stable, which is why it’s widely used in dietary supplements and to fortify processed foods… It’s estimated that 30 percent to 40 percent of the population can’t efficiently convert synthetic folic acid into folate…

Note that the FDA is not exactly banning the inclusion of folate and requiring the inclusion of folic acid in supplements. As usual, it is playing a much more subtle insider’s game. It is simply banning supplement producers from using the word folate on their labels and conversely only allowing the word folic acid on their labels. But it would of course be fraudulent to put folic acid on your label and then use something else. The FDA understands that perfectly.”

Why would the FDA do this, you might ask? One likely possibility is because it may be trying to reserve folate for drug industry use only. Not only are dietary folates essential for life, but they also have proven therapeutic benefits. Merck already holds patents on a drug called Metafolin, which is a bioavailable form of folate. Should this label change go through, Merck could stand to make billions of dollars in profits. Of course, other drug companies would surely follow suit with their own drug versions of patentable folate. As noted by ANH:

“Sound unlikely? It’s not—both forms of fish oil and vitamin D have already been turned into patented drugs. Imagine if competition from supplemental forms of fish oil or D could be wiped out at one stroke by saying no supplement label could use the term!”

I urge you to take action on this by sending your message to the FDA right now. The FDA must not be allowed to implement this change in its Supplement Facts rules. Implementation would mean that supplement producers would be forced to use synthetic folic acidonly. If you want or need bioavailable folate, you’ll have no choice but to purchase a patented drug variety, at a far greater cost than currently available in supplement form. Please join me in telling the FDA not to convert a critical, natural B vitamin from a supplement to a drug through bureaucratic labeling sleight-of-hand.

Evidence-based studies indicate that longevity is based on two major factors, genetics and lifestyle choices. Twin studies have estimated that approximately 20-30% of an individual’s lifespan is related to genetics, the rest is due to individual behaviors and environmental factors which can be modified. Although over 200 gene variants have been, ...