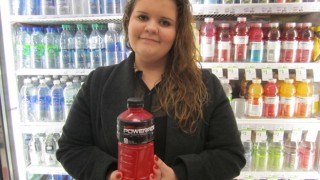 Coca-Cola has decided to change the formula of several of its beverages by removing the controversial ingredient brominated vegetable oil (BVO).

The move comes after a petition on Change.org by Mississippi teenager Sarah Kavanagh, to have BVO removed from Pepsi’s Gatorade sports drink, garnered over 200,000 signatures.

Pepsi agreed to remove the ingredient, and Kavanagh launched a similar petition for Coke with regards to Powerade.

On Monday, Coke announced it has already made the modification to several of its Powerade drinks, and that it would be removing it from all of its beverages that contain it.

BVO contains bromine, which is also used as a flame retardant and can build up in fatty tissue, leading to health problems.

The Wall Street Journal’s Jason Bellini joins Here & Now’s Jeremy Hobson to discuss the changes in the beverages, as well as overall sales of soft drinks.

Can A Daily Cup Of Coffee Prevent Eye Damage?

For those of us who love coffee – it sure is comforting to read good news about its benefits (Journal of Agricultural and Food Chemistry). You will enjoy the following  excerpts: A daily cup of coffee may prevent retinal damage due to aging, diabetes and glaucoma thanks to a powerful agent contained in coffee beans. Raw coffee may only contain ...