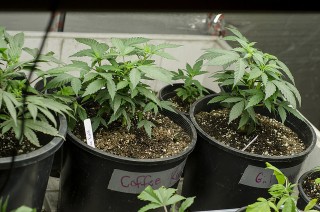 Twenty-one states and the District of Columbia currently have laws legalizing marijuana in some form.

So far, only Colorado and Washington state have legalized marijuana for recreational use, while other states permit medical marijuana.

Illinois has legalized medical marijuana with a law establishing a pilot program set to be implemented in January.

In some states, criminal penalties have been eliminated for small amounts of marijuana.

A new ad campaign in Colorado is aimed at teens who are – or may be thinking about – using pot. (Screenshot via Vimeo)

Colorado marked another milestone last week, in the roll-out of legal recreational marijuana — a first-of-its-kind ad campaign aimed at teens who are — or may be thinking about — using pot.

Ebola virus disease (EVD) or Ebola hemorrhagic fever (EHF) is a disease of humans and other primates caused by an ebolavirus. Symptoms start two days to three weeks after contracting the virus, with a fever, sore throat, muscle pain and headaches. Typically, vomiting, diarrhea and rash follow, along with decreased functioning of the liver and kidneys. ...