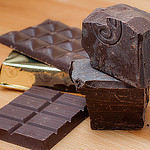 Which Chocolate Flavanols Best Protect Against Diabetes and Obesity?

Consuming high levels of flavanols found in foods like chocolate is linked to reduced insulin resistance and improved glucose regulation, which suggests it may be protective against type 2 diabetes.

Past research has also found that the regular consumption of chocolate is associated with leanness in adults2 and lower levels of body fat in teens.

Chocolate varies greatly in the different types of flavanols it contains, so researchers wanted to find out whether different cocoa flavanols were more beneficial than others.

For instance, both fermentation and processing of cocoa beans influences the final outcome of flavanols in the cocoa (cocoa refers to the powder made from roasted, husked, and ground cacao, or cocoa, seeds, from which most of the fat has been removed).

The researchers supplemented a high-fat diet for mice with monomeric, oligomeric, or polymeric procyandins (PCs), which are different types of flavanols. It turned out that oligomeric PCs were the most effective at both maintaining weight and improving glucose tolerance in the mice.

Even more intriguing, the doses of flavanols used in the study were significantly lower than those used in past research, which suggests it may be more feasible to obtain health benefits from eating chocolate than was previously thought. The researchers noted:

“The oligomer-rich fraction proved to be most effective in preventing weight gain, fat mass, impaired glucose tolerance, and insulin resistance in this model… Oligomeric PCs appear to possess the greatest antiobesity and antidiabetic bioactivities of the flavanols in cocoa, particularly at the low doses employed for the present study.”

Research presented at the 247th National Meeting & Exposition of the American Chemical Society (ACS) revealed a unique connection between the microbes in your gut and the health benefits of chocolate. While cocoa powder is rich in antioxidants including catechin and epicatechin, along with a small amount of fiber, it was thought that these molecules were poorly digested and absorbed due to their large size.

The new study found, however, that your gut bacteria break down and ferment the components in dark chocolate, turning them into anti-inflammatory compounds that benefit your health. In particular, beneficial microbes including Bifidobacterium and lactic acid bacteria “feasted” on chocolate, according to the researchers.

The study, which involved three cocoa powders tested in a model digestive tract, may help explain why chocolate has been found to be so good for your heart, as the anti-inflammatory compounds may reduce inflammation of cardiovascular tissue. The study’s lead author explained:

“In our study we found that the fiber is fermented and the large polyphenolic polymers are metabolized to smaller molecules, which are more easily absorbed. These smaller polymers exhibit anti-inflammatory activity… When these compounds are absorbed by the body, they lessen the inflammation of cardiovascular tissue, reducing the long-term risk of stroke.”

The researchers suggested that consuming cocoa along with prebiotics may be one way to encourage the conversion of polyphenols into highly absorbable anti-inflammatory compounds in your stomach.

Prebiotics are carbohydrates found in whole foods that you can’t digest… but which beneficial bacteria can, acting as “food” for them. Unprocessed whole foods, such as onions and garlic, are among the best prebiotics, so if you’re eating right, you should be getting plenty of prebiotics.

It would seem that taking steps to encourage healthful gut bacteria, in general, would also ensure that you have enough beneficial bacteria available to help break down and ferment the healthy substances in cocoa.

This includes avoiding sugar and grains, as well as eating naturally fermented foods and/or taking a high-quality probiotic supplement. One of the major results of eating a healthy diet like the one described in my nutrition plan is that you cause your beneficial gut bacteria to flourish, and they secondarily perform the real “magic” of restoring your health.

Interestingly, the researchers also suggested consuming dark chocolate with antioxidant-rich solid fruits, such as pomegranate or acai, as another way to boost its health potential.

Domestic abuse, unfortunately, is a widespread situation where one or both partners have reached the point of harming the other mentally and/or physically. The topic is too broad to adequately address it  in a brief news post.  Below is just one finding about one of the responses to the abuse: tobacco addiction. Researchers at Columbia University’s ...