Could Your Birth Year Influence Your Odds for Obesity? 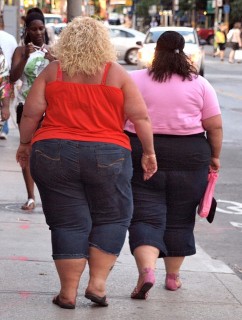 How a “fat gene” may influence your weight

No matter how healthy you eat and how much you work out, the genes you inherit play a role in determining your body type. But new science suggests that the impact of a particular gene (FTO), which can increase your risk of obesity, depends on your birth year — that people who were born with a variant of the gene decades ago are less likely to be overweight than people who were born with the same gene variant more recently.

“You could have a family where your father might be born in 1920 and you were born after 1942, and you look exactly like him, and only on the basis of the food and environment around you, you will have a higher BMI than your father,” said lead author Dr. James Niels Rosenquist, an instructor at Harvard Medical School and psychiatrist with Massachusetts General Hospital in Boston. BMI (body mass index) is a standard measurement of weight and height.

Prior studies have linked variations in the FTO gene to a propensity toward overweight and obesity. For example, federal researchers earlier this year reported that people with mutated FTO genes are more likely to eat high-calorie or fatty foods as they age, compared to people without the mutations.The researchers compared people’s genes to changes in BMI measurements  taken over time, and then compared that to the years participants were born.

The findings are reported Dec. 29 in the journal Proceedings of the National Academy of Sciences.

The study’s authors represent several institutions including Yale University and Massachusetts General Hospital. One co-author, Nicholas Christakis, M.D., Ph.D., a Yale professor sociology, ecology and evolutionary biology, and medicine, said that the study suggests that even more caution and humility in modern genetics research is warranted. “It also,” he continued, “suggests that if large-scale genetic association studies with this gene had been conducted a generation earlier, they could have had different results.”

“We know that environment plays a huge role in the expression of genes, and the fact that our effect can be seen even among siblings born during different years implies that global environmental factors such as trends in food products and workplace activity, not just those found within families, may impact genetic traits,” explained another study co-author, James Niels Rosenquist, M.D., Ph.D., a psychiatrist at Massachusetts General Hospital. “Our results underscore the importance of interpreting any genetic studies with a grain of salt and leave open the possibility that new genetic risk factors may be seen in the future due to different genetically driven responses to our ever-changing environment.”

Post-World War II factors such as increased reliance on technology rather than physical labour and the availability of high-calorie processed foods are likely contributors to the environmental effects of obesity, the authors noted.

As scientists probe further into gene-by-birth-cohort and gene-by-environment interactions, Drs. Rosenquist and Christakis said it ultimately may be important for researchers to choose broad populations from many types of environments when studying the ways genes are expressed.

Article excerpts of Dr. Mercola There are currently five different artificial sweeteners on the market. The one you’re most likely to encounter is aspartame, which also tends to be the worst of the bunch. Aspartame and other artificial sweeteners are primarily promoted to diabetics and those concerned about their weight. This despite the fact ...