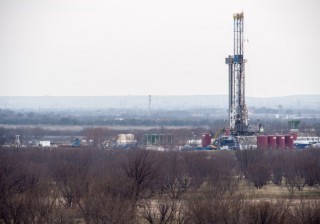 “Fracking” is the operation in which water and chemicals are injected deep underground to extract oil and natural gas. (Rich Anderson/Flickr)

We had a previous post about the dangers of  “fracking” and the results of a court case. It looks like the message is finally starting to get through.

Nearly 300 active gas wells within Denton, Texas’s city limits are coming under fire. A grassroots petition is calling for city leaders to outlaw hydraulic fracturing — or fracking — in the North Texas city.

Tonight the Denton City Council will vote on whether to permanently ban the drilling method for natural gas. A group of city residents delivered a petition with signatures from nearly 2,000 registered voters supporting the ban, causing the council to hold public hearing.

If the council passes the ban tonight, Denton would be the first city in Texas to ban fracking inside its city limits. Even if the council rejects the ban, Denton residents could vote on it in November.

Lauren Silverman of KERA in Dallas tells Here & Now’s Jeremy Hobson that regardless of how the vote turns out, the issue is headed to court.