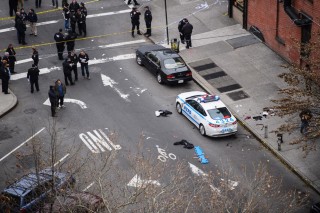 Two NYPD cops were executed Saturday after a career criminal drove from Baltimore to Brooklyn to kill police officers in a twisted bid to avenge the deaths of Eric Garner and Michael Brown. “They were, quite simply, assassinated,” a shaken NYPD Commissioner Bill Bratton said Saturday night.

Police Department Commissioner Bill Bratton (R) and New York City Mayor Bill de Blasio speak at a press conference regarding two police officers who were killed on Saturday on December 22, 2014 in New York City. Tensions between the Mayor and the New York Police Department (NYPD) have been high after de Blasio sympathized with protesters who took to the streets after grand juries declined to charge white officers in the killings of unarmed black males. Police commissioner Bill Bratton urged to ease those strains in the wake of the shooting of NYPD officers, Wenjian Liu and Rafael Ramos, of the 84th Precinct who were killed execution style on December 20 as they sat in their marked police car on a Brooklyn street corner.

We hear from Jonathan Metzl, a psychiatrist who has studied the nexus of mental illness and social protest movements.

Metzl tells Here & Now’s Robin Young he sees parallels to an issue he’s researched:  how doctors “pathologized” the politics of the 1960s and as a result, schizophrenia “became a Black disease.”

About connecting the gunman’s motive to the “Black Lives Matter” movement
“I thought that Police Commissioner Bratton’s assumption that the violent actions of the perpetrator were a spin-off of the demonstrations really was unfortunate for a couple of reasons. One is that the demonstrations were actually advocating, for the most part, the opposite of what the actions of the gunman turned out to be in that they were advocating nonviolence, ‘hands up, don’t shoot.’ Second is that there is a lot of assumption in the media about Mr. Brinsley and his psychological history, and a lot of it is unknown at this point, it is to be determined.”

About how people with mental illness are more prone to protest
“We have seen time and again throughout history that people who commit senseless gun violence do respond to a host of external stimuli. So, we have examples from everything from Tuscon to Aurora to Columbine — and again I think in this case, where people who are at risk and might be a bit mentally unstable, pick up on political and social stimuli and use them as causes for committing certain kind of crimes. Again I think where we get into trouble is saying that the content of that political protest caused the senseless acts and we don’t have the evidence to support that.”

More about why people with mental illness are more prone to demonstrate
“The classic definition of paranoia is that you over inflate or over generalize an external threat. You internalize and then project it outside into the world. And certainly people with a propensity towards paranoia do again pick up, as we see in this case, and distort the message of political movements as a means of justifying an often illogical or dangerous conclusion….But I think the larger point again is that there is no causal connection between the content of politics and mental illness. And the other point I want to make about that, is that as an aggregate group, there is a far more instances of people with mental illness being the victims of violence rather than the perpetrators of violence.”

The protest psychosis: How Schizophrenia became a Black disease.   http://dsq-sds.org/article/view/3021/3063

Do THIS To Keep Your Body Young You’re never too old to get fit. You’re never too old to keep your body young. Adults in their 60s and older who jog or run at least 30 minutes at a time, three times a week are significantly less likely to experience age-related physical decline in walking efficiency than those who simply walk for exercise, ...