Does Antibiotic Resistance Cause Needless Death and Suffering? 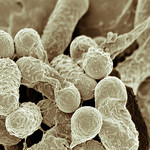 Taking antibiotics for viral infections, such as colds, flu, most sore throats, bronchitis, and many sinus or ear infections: Will not cure the infection – will not keep other people from getting sick – Will not help you or your child feel better – May cause unnecessary and harmful side effects – May contribute to antibiotic resistance, which is when bacteria are able to resist the effects of an antibiotic and continue to cause harm

Does Antibiotic Resistance Cause Needless Death and Suffering?

We have all heard of antibiotic resistant superbugs. This came about as a result of overuse of antibiotics. The antibiotics killed of the most susceptible – but left resistant strains to multiply without any opposition – until they became dominant and all powerful – resisting any attempts to destroy them. If this weren’t enough – it isn’t just a medical issue – but it has spread to the food production environment.  Here are excerpts of a very important heads up from Dr. Mercola.

In other parts of the world, such as the EU, adding antibiotics to animal feed to accelerate grojwth has been banned for years. The antibiotic residues in meat and dairy, as well as the resistant bacteria, are passed on to you in the foods you eat.Nearly 25 million pounds of antibiotics are administered to livestock in the US every year for purposes other than treating disease, such as making the animals grow bigger faster.
Eighty different antibiotics are allowed in cows’ milk. According to the CDC, 22 percent of antibiotic-resistant illness in humans is in fact linked to food.

This is a much bigger issue than antibiotics simply being left behind in your meat. For instance, bacteria often share genes that make them resistant. In other words, the drug-resistant bacteria that contaminates your meat may pass on their resistant genes to other bacteria in your body, making you more likely to become sick.

The American Pork Industry doesn’t want to curb antibiotic use, as this would mean raising the cost of producing pork by an estimated $5 for every 100 pounds of pork brought to market. The pharmaceutical industry is obviously against it as well. Even though they’re not keen on producing new antibiotics to bring to the market, they want to protect those that are already here – especially those incredibly lucrative varieties that are used perpetually in animal feed.

The FDA issued its long-awaited guidance on agricultural antibiotics on December 11, 2013. Unfortunately, it’s unlikely to have a major impact in terms of protecting your health. The agency is simply asking drug companies to voluntarily restrict the use of antibiotics that are important in human medicine by excluding growth promotion in animals as a listed use on the drug label. This would prevent farmers from legally using antibiotics such as tetracyclines, penicillins, and azithromycin for growth promotion purposes. But it certainly does not go far enough to protect public health. The guidance contains far too many loopholes for any meaningful protection.

Avoiding antibiotic-resistance is but one of several good reasons to avoid meats and animal products from animals raised in concentrated animal feeding operations (CAFOs). This is in part why grass-fed pastured meat is the only type of meat I recommend. If you’re regularly eating meat bought at your local grocery store, know that you’re in all likelihood getting exposed to antibiotic-resistant bacteria and a low dose of antibiotics with every meal… and this low-dose exposure is what’s allowing bacteria to adapt and develop such strong resistance.

As You Try to Stay Fit In the last decade, the number of obese and overweight adults has significantly risen. It gets especially harder to lose weight as you become older. Traditionally, low caloric intake was the solution for obesity. In recent years, however, growing evidence points to lack of exercise as the primary reason for the problem. The ...