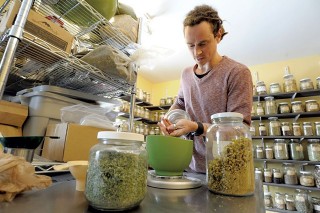 Herbalism (“herbology” or “herbal medicine”) is use of plants for medicinal purposes, and the study of such use. Plants have been the basis for medical treatments through much of human history, and such traditional medicine is still widely practiced today. Modern medicine recognizes herbalism as a form of alternative medicine, as the practice of herbalism is not strictly based on evidence gathered using the scientific method. Modern medicine, does, however, make use of many plant-derived compounds as the basis for evidence-tested pharmaceutical drugs, and phytotherapy works to apply modern standards of effectiveness testing to herbs and medicines that are derived from natural sources. The scope of herbal medicine is sometimes extended to include fungal and bee products, as well as minerals, shells and certain animal parts.

When Guido Masé was a teenager, he had what he remembers as a life-changing revelation. One day it struck him that the two seemingly opposed forces pulling on his life — his fascination with mystical spiritual traditions and his interest in chemistry, biology and other hard sciences — weren’t diametrically opposed at all. Instead, he realized, those interests could work together to inform a discipline of healing: herbalism.

“I was sitting in a tree when I figured this out,” Masé admits a bit sheepishly. “Herbalists feel like they talk to plants sometimes.”

Now 39, Masé has been engaged in a dialogue with the botanical world ever since. He’s a member of the American Herbalists Guild and founder and codirector of the Vermont Center for Integrative Herbalism, a nonprofit school and clinic in Montpelier. Masé also serves as the chief herbalist at Urban Moonshine, a producer of organic bitters and herbal tonics in Burlington. The company’s mission is to “bring herbal medicine ‘out of the cupboard and onto the counter’ in everyday life,” according to its website.

That’s Masé’s goal, too. He sees herbal remedies not necessarily as alternatives to or replacements for modern “tech medicine,” as he puts it, but as a “whole cultural system that re-wilds, renews and strengthens our species and our ecology.” The herbalist, he says, acts as the bridge between those two worlds.

To that end, Masé often works in conjunction with mainstream health care providers, including family physicians in Montpelier, cardiologists in Burlington and oncologists in Boston. Masé’s wife, Anne Dougherty, is a gynecological surgeon who specializes in global women’s health at the University of Vermont Medical Center. For a time, the couple worked together at a clinic in Tanzania using their respective specialties to treat the local population.

“If you want to start learning about herbal medicine, just go to the produce department [and get] garlic, thyme and ginger,” he suggests. “If you have those three, you can do so much.”

Researchers at the University of California-San Diego School of Medicine report findings on the role a sugar specific to red meat may play in forming tumors in humans. The researchers wanted to understand why people who eat a lot of red meat are at higher risk for certain cancers, while people who eat other types of meat are not. The team first conducted ...