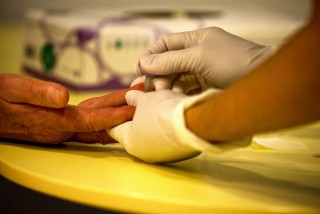 The increase in the prevalence of diabetes over the past few decades has coincided with an increase in certain risk factors for diabetes, such as a changing race/ethnicity distribution, an aging population, and a rising obesity prevalence. The mere fact that obesity is related to diabetes should be enough to have Americans watch their weight. Unfortunately, either the message hasn’t been publicized enough 0r the momentary eating enjoyment fuels a lack of self control.

Statistics show that more than one-third of the U.S. adult population is obese, according to estimates provided by the Centers for Disease Control and Prevention (CDC) Center for Health Statistics (NCHS).

Furthermore, researchers believe that the obesity epidemic is one of the driving forces behind the rising rates of type 2 diabetes throughout the country–a health issue that’s marked by insulin resistance.

For their findings, researchers analyzed data from five national surveys spanning from 1976 through 2010 to determine how much the increase in diabetes over time could explain certain factors such as changing distribution of race, age and obesity.

The study results revealed that the prevalence of diabetes in men rose from about five percent to more than 11 percent, while women experienced a three percent increase from six to nine percent.

Throughout many of the factors contributing to the disease, researchers found that about half of the increase was explained by obesity.

More information regarding the findings can be seen via the Annals of Internal Medicine.

Is This The Healthiest Breakfast Recipe?

The popular American breakfast usually includes processed cereals, baked items,  and fried dishes. We won’t go into the pros and cons of this type of breakfast – are there any pros? – but instead present what Dr. Mercola believes is the healthiest possible one. If you’re looking for a healthy breakfast, you’ll want to bypass ...