Guess What Was Found In Foods Labeled 0 Grams Trans Fat 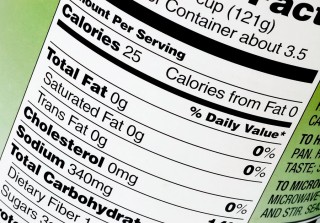 Trans fats are unsaturated fats which are uncommon in nature but can be created artificially.

In food production, liquid  unsaturated fats such as vegetable oils are hydrogenated to produce saturated fats, which have more desirable physical properties e.g. they melt at a desirable temperature (30–40 °C). Although trans fats are edible, consumption of trans fats has shown to increase the risk of coronary heart disease  in part by raising levels of the lipoprotein LDL (so-called “bad cholesterol”), lowering levels of the lipoprotein HDL (“good cholesterol”), increasing triglycerides in the bloodstream and promoting systemic inflammation. People who consume trans fat may be at higher risk for heart disease, stroke and diabetes, studies have suggested.

Trans fats are still in many foods, according to a new study from New York City’s Department of Health and Mental Hygiene, published in CDC journal Preventing Chronic Disease.

“This labeling is cause for concern,” the authors wrote, “because consumers, seeing the ‘0 g trans fat’ on the Nutrition Facts label, are probably unaware that they are consuming trans fat.”

Food makers are allowed to say their product has 0 grams of trans fat so long as the amount in their food contains 0 to 0.5 grams per serving. The study found that companies used this loophole to claim zero trans fat on their labels. Those sneaky amounts often show up if a product contains partially hydrogenated oil, a preservative.

The researchers looked at 4,340 best-selling foods in the U.S. and found that of the 4,340 products analyzed, 391 listed partially hydrogenated oils in their ingredient information, but 330 of those products claimed to have zero grams of trans fat per serving on the nutritional label. The packaged processed foods that were analyzed included cookies, frozen entrees, frozen pizza, salad dressing, margarine and canned soups.

The worst culprits were baked goods, crackers, frozen foods and products with seasonings.

“Industrial trans fat is still common in U.S. packaged foods” and “most products that contain PHOs are labeled as containing 0 g of trans fat,” the researchers write. Consumers are encouraged to watch out for the words “partially hydrogenated” or “PHO” on product labels that claim to have no trans fats.

What could go wrong when you buy an ice cream? The health conscious may be wary of the sugar content, or the chemicals added for preservation and flavor enhancement. But in this article we encounter additives that prevent the ice cream from melting. You may ask – so – what is so bad with them? Plenty wrong –  “Walmart’s ice ...