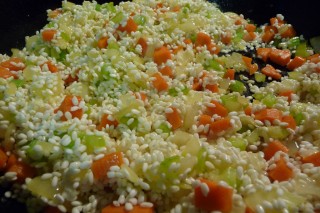 Rice, the base for cuisines all over the world, contains a lot of starch. That makes it delicious but also high in calories. While that may a boon for people who struggle to ingest enough calories each day, it’s becoming a problem for people with sedentary lifestyles who are eating too many calories. The result is a worldwide obesity crisis, and, surprisingly, the percent of obese adults is increasing faster in developing countries. Now a team of Sri Lankan researchers has devised a new way to cook rice that reduces the amount of starch–and calories–the body absorbs from rice by up to 60 percent. The researchers presented their findings this week at the meeting of the American Chemical Society in Denver.

Rice is a staple in many places around the world, but given its content of both starch and calories, it’s not necessarily a healthy one.
Scientists from Sri Lanka have figured out a way to lessen the weight gain-inducing effects of the popular grain, and it involves a cooking technique that’s simple enough to do at home.  That trick is, as explained by one of the researchers, “… when the water is boiling, before adding the raw rice, we added coconut oil—about 3 percent of the weight of the rice you’re going to cook. After it was ready, we let it cool in the refrigerator for about 12 hours. That’s it.”

Why it works is a matter of how the approach switches up the composition of the grain. When prepared conventionally, rice is primarily made up of starches that are easily digestible and thus quickly transformed into glucose, then glycogen and ultimately fat. The scientists’ preparation method turns part of that starch into matter the body can’t process, thus diminishing its undesirable effects.  By how much varies based on the type of the grain used, but caloric reductions could be as high as 60 percent .

Adding coconut oil to your rice could cut calories in half

James and his colleagues developed a new cooking method that increases the RS content of rice by experimenting with 38 different types of rice native to Sri Lanka. The method called for adding a half cup of uncooked rice to boiling water with a teaspoon of coconut oil. Researchers let the rice simmer for 40 minutes, but confirmed that boiling for 20 to 25 minutes would also work. The last step of the process involved refrigerating the rice for 12 hours.

The RS content of traditional, non-fortified rice increased 10-fold using this new method. The research team explained that during their cooking process the oil alters the starch by making it resistant to the action of digestive enzymes. Cooling the rice for 12 hours was essential to lowering the number of calories that are absorbed by the body, and reheating the rice before eating had no effect on its RS content. James plans on conducting further testing on human subjects to determine if different types of rice and cooking oil have the same effect.

“After your body converts carbohydrates into glucose, any leftover fuel gets converted into a polysaccharide carbohydrate called glycogen,” James added. “Your liver and muscles store glycogen for energy and quickly turn it back into glucose as needed. The issue is that the excess glucose that doesn’t get converted to glycogen ends up turning into fat, which can lead to excessive weight or obesity.”

There are 1.6 ounces of starch in a cup of rice. Starch can either be digestible or indigestible, both of which are found in rice. Indigestible (RS) starch is not broken down in the small intestines, which is where carbohydrates are metabolized into glucose and simple sugars are absorbed into the bloodstream. By converting digestible starch into RS, the research team lowered the number of usable calories in a cup of rice.

Doctors warn that reheated rice can cause food poisoning. However, it’s not the reheating that causes the problem but the way the rice has been stored before it was reheated.Uncooked rice can contain spores of Bacillus cereus, a bacterium that can cause food poisoning. When the rice is cooked, the spores can survive. If the rice is left standing at room temperature, the spores can grow into bacteria. These bacteria will multiply and may produce toxins that cause vomiting or diarrhoea. The longer cooked rice is left at room temperature, the more likely it is that the bacteria or toxins could make the rice unsafe to eat. How to serve rice safely:  ideally, serve rice as soon as it has been cooked –  if that isn’t possible, cool the rice as quickly as possible (ideally within one hour) –  keep rice in the fridge for no more than one day until reheating – · when you reheat any rice, always check that the dish is steaming hot all the way through – do not reheat rice more than once .

If there wasn’t enough evidence about the actual damage and potential damage that is associated with various soda beverages – there comes along a new study pointing the same accusing finger – but in an entirely new direction. Sugary Sodas May Raise Rheumatoid Arthritis Risk A new study finds a link between sugar-sweetened soda and ...