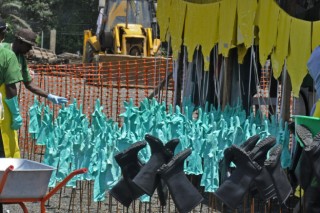 Symptoms of Ebola  typically include

Symptoms may appear anywhere from 2 to 21 days after exposure to ebolavirus, although 8-10 days is most common.

Some who become sick with Ebola are able to recover. We do not yet fully understand why. However, patients who die usually have not developed a significant immune response to the virus at the time of death.

Gloves and rubber boots forming part of the Ebola prevention gear for health workers at a clinic are set outside for the sun to dry them after being washed in Monrovia, Liberia Monday, Sept. 8, 2014. (Abbas Dulleh/AP)

President Obama is meeting with infectious disease experts today from the Centers of Disease Control and is expected to announce plans to expand U.S. efforts to combat the spread of Ebola in Africa.

The U.S. will send some 3,000 U.S. troops to conduct the military and medical response, including the construction of 17 Ebola treatment centers in the Liberia.

NPR science reporter Nell Greenfieldboyce is following the story. She tells Here & Now host Jeremy Hobson about the plan and why the administration is focusing solely on Liberia.

You can listen to the interview at the Here and Now website by clicking here.  You can also download it from link below.

Can Obesity Change Your Brain Chemistry?

Obesity means having too much body fat. It is different from being overweight, which means weighing too much. The weight may come from muscle, bone, fat, and/or body water. Both terms mean that a person’s weight is greater than what’s considered healthy for his or her height. Obesity occurs over time when you eat more calories than you ...