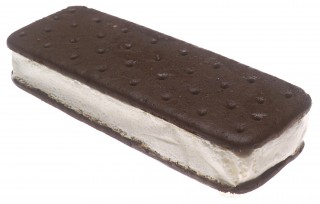 What could go wrong when you buy an ice cream? The health conscious may be wary of the sugar content, or the chemicals added for preservation and flavor enhancement. But in this article we encounter additives that prevent the ice cream from melting. You may ask – so – what is so bad with them? Plenty wrong –  “Walmart’s ice cream sandwiches contain a long list of “gums” and additives, like corn syrup, that might contribute to its odd inability to melt; “gum” additives are food stabilizers designed to help food keep its shape.”

The following is Dr.Mercola’s report. Earlier this summer, a woman in Cincinnati noticed that her son’s Walmart-brand ice cream sandwich didn’t melt when he accidently left it outside for 12 hours, in 80-degree F weather.

Understandably surprised by the seemingly unmeltable ice cream sandwich, she tried the “experiment” again, with the same result. While other brands melted completely, the Walmart ice cream remained eerily intact. She then called a local news station, who conducted a test of its own, which you can watch in the video above.

After one hour and 15 minutes outside in sunny, 80-degree F weather, Walmart’s ice cream sandwich is still remarkably solid. Next to it, a scoop of another brand’s vanilla ice cream is turned to soup after just 30 minutes.

It’s unclear exactly how much cream these sandwiches contain in comparison to other brands, but it is suspicious that the spokesperson made no mention of the long list of “gums” and additives, like corn syrup, that might also contribute to its odd inability to melt.

These non-food ingredients are mostly used as food stabilizers designed to help food keep its shape (and you won’t find them in higher-quality ice cream brands like Haagen-Dazs).

If you look at the ingredients list below for Walmart’s “Great Value Vanilla Flavored Ice Cream Sandwiches,” you’ll see what I’m referring to:

Also strange is the fact that Sean O’Keefe, a professor and food chemist at Virginia Tech, gave the opposite account of what happens if ice cream contains more cream; he said that ice cream with more cream will actually melt faster, which contradicts Walmart’s spokesperson. As reported by the Pittsburgh Post-Gazette, this means ice cream that’s low- or no-fat would take longer to melt:

“More water means the ice cream will have to absorb more energy before it can melt. Also, low-fat ice creams tend to have more air whipped into them, which allows them to keep their shape longer.”

Walmart’s “ice cream”… to be labeled as ice cream, it must contain at least 10% milk fat. Beyond that, it can contain any number of additives that many would argue are not actual “food.” Real ice cream also contains just a few ingredients, like milk, sugar, cream and vanilla bean, bearing little resemblance to Walmart’s ice cream concoction. If you want to taste the best ice cream you’ve ever had, make your own at home using raw milk. It’s a relatively healthy treat when eaten in moderation (and, yes, it will melt if you leave it out in the sun).

Walmart is a prime example of where not to shop for food if you value your health. While it’s possible to find some healthy foods at Walmart, the vast majority of their food is heavily processed. Perhaps that’s why Walmart grocery stores are linked to obesity. An additional Walmart Super center per 100,000 residents increases average BMI by 0.24 units and the obesity rate by 2.3 percentage points.

Researchers hypothesized that the substantial reductions in the prices of food at Wal-Mart Supercenters end up “reducing the opportunity cost of food consumption and increasing the opportunity cost of physical activity,” thereby leading to a rise in obesity rates. Plus, ever since Walmart decided to significantly increase their organic offerings, they have been bombarded with accusations of selling substandard organic food, produced at concentrated animal feeding operations (CAFOs) or imported from China, not grown on small, US organic farms like consumers are led to believe.

They’ve even been accused of posting signs in their stores that mislead consumers into believing that non-organic items are actually organic. Perhaps worse, however, is that Walmart’s biggest sellers are heavily processed junk foods. The unmeltable ice cream sandwiches, for instance, are one of the most popular items in the dairy case, according to the company’s spokesperson. Processed foods may contain dozens of artificial chemicals that are in no way real “food.” These include:

Food manufacturers typically claim that artificial food additives are safe, but research says otherwise. Preservatives, for example, have been linked to health problems such as cancer, allergic reactions, and more. Plus, processed foods often have the real nutrition processed right out, then sometimes added back in in the form of synthetic vitamins and minerals. These synthetics do not fool your body, however, and will not provide the whole, synergistic nutrition that eating whole food will. Instead, most processed foods are primarily composed of refined carbohydrates, which quickly break down to sugar in your body.

This increases your insulin and leptin levels, and contributes to insulin resistance, which is the primary underlying factor of nearly every chronic disease and condition known to man, including weight gain. Further, processing modifies or removes important components of food, like fiber, water, and nutrients, changing the way they are digested and assimilated in your body. Unlike whole foods, which contain a mix of carbohydrates, fats, proteins, fiber, and water to help you feel satisfied, processed foods stimulate dopamine, a feel-good neurotransmitter, making you feel good even though the food lacks nutrients and fiber.  This artificial dopamine stimulation can lead to excessive food cravings and, ultimately, food addiction. These, of course, aren’t problems confined to junk food sold Walmart; they exist for all heavily processed foods.

Depression is not “one size fits all,” particularly when it comes to the genders. Not only are women more prone to depression than men, but the causes of female depression and even the pattern of symptoms are often different. Many factors contribute to the unique picture of depression in women—from reproductive hormones to social pressures ...