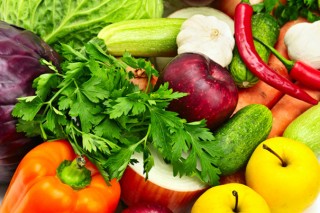 For those considering making the switch to organic, a recent study describes three more reasons which may convince you. The study, by the British Journal of Nutrition, found that organic produce has more antioxidants, less pesticides, and less heavy metals than its non-organic counterpart.

Organic farming practices are focused on conservation and reducing pollution. Agricultural pesticides, as well as fertilizers, contribute to the environmental pollution. Thus, organic farming incorporates organic fertilizers (such as manure and compost) and non-pesticide based crop protection methods (including crop rotations and mechanical or flame weeding).

While many consumers expect that organic crops will have fewer pesticides, this latest study also describes an unexpected benefit of organic produce – more antioxidants. “Based on the differences reported, results indicate that a switch from conventional to organic crop consumption would result in a 20–40 % (and for some compounds more than 60 %) increase in crop-based antioxidant/(poly)phenolic intake levels,” the authors write.

The present study finds that organic and conventional vegetables offer similar levels of many nutrients, including minerals, vitamin C and vitamin E. The authors note that the differences in antioxidant levels could have been missed by previous studies due to the “highly limited number of studies/data sets available or included.”

Higher levels of antioxidants would be desirable due to evidence of the anti-cancer properties of antioxidants such as carotenoids and flavonoids. However, according to Jeffrey Blumberg, a professor of nutrition at Tufts University, regardless of whether or not they are organic, we simply aren’t eating enough antioxidant rich fruits and vegetables.
“Most Americans are getting only a couple of servings of fruits and vegetables every day,” Blumberg told NPR. “We’re recommending that they get up to nine servings.”

Aside from antioxidant levels, researchers also found lower levels of pesticides and cadmium, a toxic heavy metal. The meta-analysis showed that organic crops had cadmium levels which were 48 percent lower than conventional crops. Also, the analysis showed that the frequency of detectable pesticide residues was four times higher in crops grown with conventional methods.

You can read the complete article by clicking here.

Why Is Sleep Important And What Are The Hazards of “Dream Deprivation”?

We have all heard about the importance of getting enough sleep. But many don’t pay attention. Probably the results of not getting enough have not been driven home. Perhaps the benefts were not well explained. We have here a summary of an expert’s intensive research – it should make a difference. Dr. Rubin Naiman, author of Hush: ...