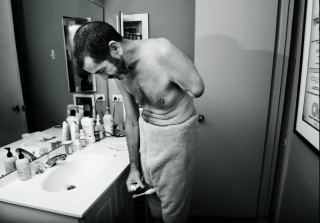 Veteran TV reporter Miles O’Brien injured his arm earlier this year while out on assignment. When he had to get it amputated, his world changed dramatically in more ways than he could imagine. But as he said, “Whether I like it or not, this is the story of my life.”

O’Brien talks to Here & Now’s Robin Young about his first months of denial, why he delved immediately back into work and how he’s adapting to his loss.

“Every day offers a series of little struggles. It’s not like there’s any one giant thing that I can’t do yet — I’ve figured pretty much everything out. I’ve sort of become a one-armed MacGyver, trying to figure out how to reengineer my life. But what I find is that everything takes so much longer.”

“At the end of the day, I’m kind of cranky. I haven’t done as much as I expected. So what I’m finding is I’m, number one, lowering the bar a little bit about what I expect to get done in the course of a day. And I’m also finding that it doesn’t hurt to ask people for help.”

On going right back to work

“Well, a little bit of that is denial. And I think a little bit of that is probably healthy too, because frankly when something like this happens, if you allow yourself you start to question your abilities and your viability in a business that values, after all, how you look … so for me, in that moment, all of it came together that the best tonic was to dive into my work. I think honestly I probably deferred dealing with a lot of the emotional impact, but in the end, I think it was the right thing for me. It really has helped me move into the next phase of my life, knowing that I was able to accomplish what I set out to do there as far as my work journalistically, and frankly that no one seems to care too much if I appear on CNN with an empty sleeve.”

On what he’s gained

“I’d never been to a therapist in my life, and there I was, talking about loss and resilience and how I’d been coping. He asked me about what it’s been like to hear from so many people. It occurred to me how much of an outpouring there was of love for me, from a lot of people who I didn’t even know. Obviously it meant a lot that my family and friends were there, but there was this amazing sense of being part of a community in a way I hadn’t ever felt before. I was the one-man-band journalist, and happy to do it … I was the independent guy at all costs. You sort of build up a coat of armor around you when you do that.”

What You Didn't Know About Watermelon

Many of us love to eat watermelon. It’s a great cold summer treat on a hot sticky day. But there is more than taste. Check out some facts you may not have known about this tast treat. You can read more about it in the original article clicking here. There’s more to watermelon than just its flavor: It boasts some powerful health benefits, ...