Never Too Late To Start Your Exercise Program 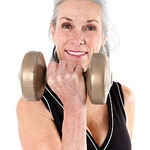 Even if you only start exercise after the age of 40, you can still reduce your risk of heart disease and other forms of ailments. Researchers interviewed people of the same age group, some of them suffered from coronary artery disease while others were completely healthy. They found that half of those with heart disease and most of the healthy people were moderately or very physically active in early and late adulthood. Those who were active all their lives enjoyed better health and were less likely to suffer from any form of heart disease. Those who became physically active at the age of 40 were about 55 percent less likely to have heart disease than those who were inactive their entire lives. That’s one piece of great news for those who’ve lost all hope to start getting healthy.

Here’s another fact you should know: vigorous exercise seldom causes problems in healthy individuals. However, it raises the risk of heart attack in people with partly blocked arteries, since it may make blood more prone to clot, causing completely blocked arteries. So, if you suffer from problems related to your arteries, you need to look into improving your diet first and starting slow. Yoga makes a good alternative for those who want to build on their muscles and yet put less strain on their bodies.

Regular exercise can reverse age-related brain decline. There’s substantial evidence showing the benefits of aerobic exercise and physical activity on such “executive-control’ brain functions as task coordination, planning, goal maintenance, working memory, and ability to switch tasks. There are also findings that support how regular moderate exercise that makes a person breathless improves the way the brain functions. It also increases the actual volume of brain tissue, as well as the speed and sharpness of thought. These benefits were noted in both people with no signs of progressive brain disease or those with Alzheimer’s disease. Six months of aerobic exercise reverses age-related decline and helped older adults’ brain retain plasticity. This capacity for brain to grow and develop plays a big role in the person’s sharpness of thought. As long as you have high levels of physical fitness, there’s less deterioration of cognitive capacity.

As for your diet, staying fit is better achieved when you take a lot of fiber. There are medicines that contain more natural fiber than oatmeal and cereal. The pills, when taken regularly, lowers cholesterol levels, absorbs fat, and assists the body to convert cholesterol into bile acids, reducing the risk of suffering from debilitating heart diseases. These also slow the accumulation of sugar in the blood by helping regulate the digestion of carbohydrates. You need to promote a feeling of fullness, help reduce your cravings, and lessen your tendency to overeat just by taking in the necessary amount of fiber. Moreover, the medicines which are sold in most health stores aids in flushing wastes and toxins through the regular movement of wastes out your system. Check these out and do something about your health while you still can.

How Does Atrial Fibrillation Lead To Stroke?