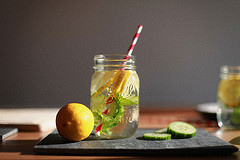 In our environment, we absorb a lot of toxins from all over and almost everything. Some tolerate this onslaught without any visible problems. Others come down with many ill that ere traced to toxin exposure. The main question to address is: how to rid of of toxins that have managed to get into out bodies. Read the results of 2 researchers that have published their experience with successful toxin removal.

Sauna, organic produce, and exercise are some of your best detox options

One of the realities of 2014 is that when a baby is born, he or she has already been exposed to toxic chemicals. The evidence is in umbilical cords, which research has confirmed contain pesticides, waste from burning coal and gasoline, and garbage. Even if you try to do everything right (eat organic, buy natural products, live in a cabin in the middle of the woods, etc.), you can’t avoid all of the chemicals that have become pervasive.

Bruce Lourie and Rick Smith researched the dominance of these chemicals while writing their first book,Slow Death by Rubber Duck: How the Toxic Chemistry of Everyday Life Affects Our Health (2009), which took a look at everyday items, including canned food, pajamas, Tupperware, and rubber ducks, that put toxins into our bodies. Their readers bombarded them with a simple question: If all this stuff is inside us, how do we get it out?

So the two authors, armed with Smith’s PhD in biology and collective decades working in the environmental field (Smith’s the executive director of the Broadbent Institute and Lourie is the president of the Ivey Foundation), went out again to determine what actually worked to get toxins out of the body. Through a series of self-designed experiments on themselves and others, they take readers through their journey in Toxin Toxout: Getting Harmful Chemicals Out of Our Bodies and Our World (buy link below).

Here are some key facts they learned about what actually matters when it comes to detoxing:

1. Chemicals are everywhere, but you don’t have to worry about all of them.

Not all chemicals are actually going to damage us, Laurie said, and people have different tolerance to chemicals (though you may find that out the hard way). Some chemicals are disappearing from our lives (DDT, dioxin, lead) because of awareness of their dangers. “I joke sometimes that I’m a worrier, and I carry around a worry list with me,” Smith said. “In the book, we tried to come up with a short worry list.” The list included phthalates, BPA, pesticides, methyl paraben, triclosan, sodium lauryl sulphatel, and metals that can be harmful when they accumulate, such as aluminum, tin, and mercury. Yes, that’s still a long (and confusing) list, but there are some simple ways to avoid or eliminate them.

2. Avoid some toxins by shopping natural.

Chemicals don’t just get into our bodies through what we eat — they come in through what we slather on our skin, what furniture we sit on, and what we breathe. While reporting for the book, Smith measured his urine before and after simply sitting and breathing in a new Chevy Tahoe for eight hours, and found that doing so had elevated his body’s levels of four chemicals from the worry list. So shop smart (and roll down the windows when driving). “When you’re making a purchase, be it a cosmetic, a shampoo, or a new sofa, ask ‘Is this the most natural thing I could buy?’” Lourie said. Read ingredient labels and look up the ones you can’t pronounce. Do your research and check out eco-certifications before making big purchases like sofas or cars to see which, like the Tahoe, are made with dangerous chemicals.

3. Organic is actually better, if you want to avoid pesticides.

4. It’s better to adjust your habits than to go through a cleanse.

One of the most basic things you can do to get toxins out of your body is to drink more water. Another is to eat less animal fat and more (preferably organic) fruits and vegetables. But is the best way to do that a four-day juice cleanse? Probably not, say Smith and Laurie. “‘Cleanse’ makes it sound like it’s a special thing,” Lourie said. “If you’re eating more vegetables and drinking plenty of water, and you want to put the vegetables in the water, that’s a good thing to do. Just don’t be mistaken that if you do that for four days out of the year, you’re going to be detoxing your body — it doesn’t work that way.” It’s much better to incorporate fruits, veggies, and water into your daily diet.

Toxins enter your body through what you eat, breathe and touch, and they go out the same way, through breath, digested food and drink, and sweat. While exhaling and urinating are pretty non-negotiable, a lot of us are engaged in a war against sweat. “We’re really confused as to what clean smells like,” Jessa Blades, an eco-blogger, tells the authors in the book. Antiperspirants and some deodorants prevent us from sweating out toxins while using toxic metals to keep the sweat in, a “double toxic whammy” Smith said. Lourie even admitted that he’s stopped using deodorant. Even if you change or quit your antiperspirant, you should try to sweat more, too. You can do this by exercising more or by using saunas to “detox through heavy sweating,” Lourie said. You’ll also end up drinking more water, which is good for eliminating toxins.

Fat holds on to toxins, which is part of the reason chemicals like DDT still hang around our systems. So if you’re eating lots of animal fat, you’re also eating the chemicals that the animal fat is holding. Then, you’re probably also putting on weight and thus adding fat to your body, which will hold on to those chemicals. “It’s a positive feedback loop,” Lourie said. In fact, if you’re worried about toxins and you’re overweight, losing that extra body fat should be the first step toward reducing the toxins in your body.

7. Push companies to do the right thing, and support regulation of toxins.

“Only part of the solution to this problem is being a more careful consumer,” Smith said. ‘The other part is to be a more engaged citizen.” Remember when people learned that Subway bread contained a yoga mat chemical, and took to social media to demand that change? “Never has a company capitulated so quickly,” Smith said. It’s easier than ever to make your voice heard.

Check out this great five star resource on toxin removal:

“This is a guide for scrubbing toxins OUT. Two of North America’s leading environmental activists give practical and often surprising advice for removing toxic chemicals and cleansing our bodies and homes.”

“They give us the good news about what is in our control and the steps we can take for reducing our toxic burden. They investigate the truth behind organic foods, which detox methods actually work, if indoor air quality is improving, and how we dispose of waste (where do those chemicals go?). The result is nothing short of a prescription for a healthier life.”

BRUCE LOURIE is a leading environmental thinker, writer and speaker. He is President of the Ivey Foundation and is a director of several organizations in Canada and the United States.