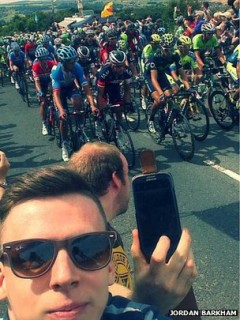 The world’s most storied bicycle competition, the Tour de France, has been imperiled by spectators trying to take selfies.

Riders have taken to social media with pleas for fans to show restraint, since fans turning their backs on the race to take photos are unaware of where the riders are and how fast they may be going.

Here & Now’s Robin Young speaks with Bill Strickland, interim editor of Bicycling magazine about the phenomenon and get his take on this year’s race.

On the dangers of taking selfies in front of riders

“Look, this can be really serious. Spectators have been killed by getting hit by bikes. Riders themselves can have their careers ruined, they can be taken out. It’s sort of a funny phenomenon and I am sort of enjoying it, to be honest. But there is a really serious aspect to this that someone’s really going to get hurt.”

On what separates this year’s race from other years

“The past few years the tours tended to be just a test of fitness. The guys could look down at the computers on their handlebars and see how many watts they were putting out and just, sort of, carefully judge how hard they needed to go. This course is more of a racer’s course. It’s going to reward some risk taking and some savvy strategy.”

How Get All The Benefits Of Exercise In Less Than A Week – Click Here!

People relate heart attacks to lack of exercise and bad diets. But there is important evidence that there is a third important factor – stress. Read about this new finding below. Dr. Mercola presents his valuable and vital findings. About one in every three deaths in the US is attributed to heart disease. The most common form of heart disease ...