Spicy Foods Are Good For You – 5 Hygiene Myths 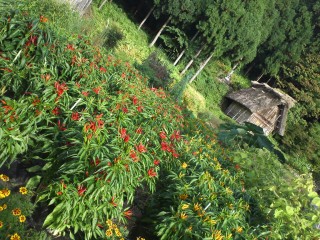 What we know about metabolism is that it is the amount of energy or calories needed by your body to maintain itself throughout the day. Studies have shown that a spicy meal, such as a bowl of chili, can provide a temporary rise in metabolism of about 8% greater than a person’s typical metabolic rate. Capsaicin is the source from which hot peppers get their heat. This amount is considered rather negligible and similar studies have reported the same results with people eating black pepper and ginger as well.
Though you would have to eat a lot of capsaicin to have an overall effect on your weight, this temporary boost in metabolic rate may also help to suppress your desire to eat.

You’ve tried every other weight loss supplement. Now try capsaicin. A recent study presented at the Biophysical Society’s Annual Meeting suggests consuming chili peppers can aid in weight loss by way of thermogenics, the process of creating heat from burning fat. After adding capsaicin to the high-fat diet of mice, researchers from the University of Wyoming found that capsaicin prevented weight gain by turning on thermogenesis in the body.

Adding a little spice to your meal can even protect the ole ticker. Another study presented at the 243rd National Meeting and Exposition of the American Chemical Society (ACS) found that chili peppers could protect against the No. 1 cause of death in the U.S. Researchers fed hamsters a diet high in cholesterol with either supplements with various amounts of capsaicin or no capsaicin at all. In spite of a high cholesterol diet, feeding hamsters capsaicin effectively reduced “bad” cholesterol while having no effect on “good” cholesterol. Capsaicin supplementation also seemed to reduce the size of heart attack or stroke-causing deposits already formed in blood vessels

According to the American Cancer Society, evidence has shown that capsaicin in oral and topical forms can help manage pain caused by surgery and mouth sores due to chemotherapy and radiation therapy. Capsaicin in its topical form is currently approved by the Food and Drug Administration to treat pain caused by conditions, such as arthritis and general muscle soreness. It is the most-studied active ingredient in the Capsicum herb plant. Some research has shown that antioxidant properties found in capsaicin can help fight the cancer-causing agent carcinogen nitrosamine.

By Justin Caba, a reporter for Medical Daily focusing on nutrition, fitness, and all things athletic.

Free radicals are atoms or groups of atoms with an odd (unpaired) number of electrons and can be formed when oxygen interacts with certain molecules. Once formed these highly reactive radicals can start a chain reaction, like dominoes. Their chief danger comes from the damage they can do when they react with important cellular components such as DNA, ...