The Best Therapy To Fight Parkinson’s 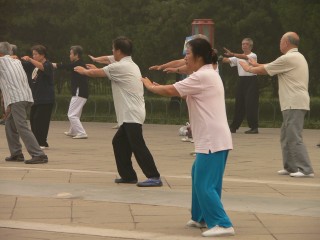 We don’t appreciate the benefits of exercise. The following post is about how exercise can relieve the agonizing and debilitating symptoms of Parkinson’s. If it can do so much for someone in poor condition, especially so where motor skills are affected. imagine how much more so it will benefit the healthier among us.

Mike Quaglia was 42 when he was diagnosed with Parkinson’s disease, which gradually robs its victims of their ability to move normally. For the next seven years, his condition deteriorated despite medication.

“I was at a point where I was either going to give up and let the Parkinson’s take over, or I was going to decide to fight back,” Quaglia says.

Fight back he did — literally. Last February he stumbled on a program called Rock Steady Boxing. That’s right: It teaches Parkinson’s patients how to box.

So now you can find Quaglia at Fight 2 Fitness, a gym in Pawtucket, R.I., several times a week, his hands encased in bright red boxing gloves.

Alongside him are a dozen other Parkinson’s patients. They range from a 46-year-old mother of teenagers — she sports pink boxing gloves — to an 84-year-old former phys ed teacher who uses a wheelchair.

They don’t punch each other. They’re hitting 100-pound punching bags when they’re not stretching or doing calisthenics.

On days Quaglia boxes, he doesn’t need to take medication for six hours afterward — twice as long as usual. His depression has lifted, and he has more self-confidence. Boxing, he says, “doesn’t cure, but it helps.”

Scientists are trying to figure out just how exercise can counter the effects of Parkinson’s and possibly even prevent it. Among more than 43,000 Swedes followed for nearly 13 years, the risk of Parkinson’s was almost cut in half for those who engaged in moderate levels of exercise.

One clue is that animals with a form of the disease have higher levels of dopamine — the brain chemical deficient in Parkinson’s — if they’re made to exercise.

Peter Wayne at Harvard Medical School and Brigham and Women’s Hospital is looking at how the brains of humans with Parkinson’s change in response to six months of exercise.

Sports trainers recommend training programs that help women learn to run, jump, and pivot with knees bent to avoid knee injuries. In sports such as soccer, basketball, and volleyball, women who bend their knees and play low to the ground have fewer knee injuries than women who run and pivot with stiff legs. http://www.webmd.com/pain-management/knee-pain/knee-problems-and-injuries-prevention Daryl ...