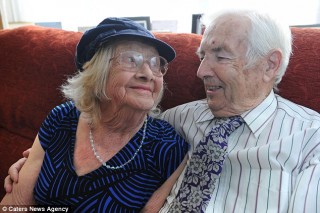 By BIANCA LONDON FOR MAILONLINE

A devoted couple celebrating their 70th wedding anniversary have put their martial success down to twice-weekly ballroom dancing.

Gladys and Ron Tearne, 91 and 92 respectively, say the secret to their love is spending hours together on the dancefloor – and the only thing they argue about is who took a step wrong.

As one of Britain’s longest married couples, the pair wed just weeks after meeting in 1944 and have three children and three grandchildren.

Ron said: ‘We wouldn’t be where we are now if it weren’t for all those years dancing away.’

The devoted couple met in Coventry, West Midlands, where they still live, while Ron was on leave from the RAF in the Second World War.

Gladys was with her friends and Ron immediately spotted her and went to ask if she would take a walk.

Speaking about the moment he set eyes on her, Ron said: ‘It was love at first sight – as soon as she came in I saw her and said to my friend, “Look at that beautiful blonde!”

‘I’ve never been luckier than when she said yes!’

Within six weeks they had married on November 22, but Ron had to return to Wales for active service the next day.

They were separated for six months while Ron served as an air gunner in coastal command in the Azures and were forced to resort to writing letters to stay in touch.

They had three children Pam, 69, Ray, 66, and Michael, 56 and never missed the twice weekly dancing classes that have sustained them through 70 years of marriage.

After celebrating their Platinum anniversary by sweeping across the dancefloor to Vera Lynch’s The Anniversary Waltz, the couple were surprised with a champagne reception by their dance teacher.

And Ron thinks their traditional moves could even help the Strictly dancers find love.

‘It’s more acrobatics than dancing – and the music is not what we’re used to.

‘If they stuck to the traditional stuff and had more time in hold, I’m sure they would be as lucky in love as us.

‘We’ve been to so many dances through the years – it’s kept us together.

‘It was awful being separated so soon after we’d met – the day after we got married I had to go back to camp in St David’s, Wales, and then I was soon shipped off to the Azures.

‘But once I got home it was glorious. We’ve been incredibly lucky to have had such a happy life together.

‘Tolerance has always helped us get by, if we’d not been able to forgive each other little annoyances we’d have never made to 70 years.

‘But dancing has been our saviour – having a shared hobby and doing something we could always enjoy together.

‘Whenever we had a little tiff, we couldn’t carry on arguing because we had to be back on the dancefloor.

‘And now the only thing we disagree over is who put a foot wrong!’.

Let’s face it – sooner or later we all die – but a new study says feeling sprightly might suggest a person has more time left than people who feel their age or older. Mind Over Matter: Feeling Younger Linked to Lower Death Rate A new study finds ‘a strong relationship’ between people’s self-perceived age and their cardiovascular ...