The Stories of Dutch Lives Lost on Flight MH17 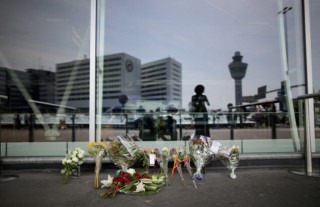 Today, floral tributes adorn the entrance to Amsterdam’s Schiphol Airport memory of the victims of Air Malaysia flight MH17. The Boeing 777 was carrying 298 people including crew members, the majority of the passengers being Dutch nationals, believed to be at least 173, 44 Malaysians, 27 Australians, 12 Indonesians and 9 Britons. (Christopher Furlong/Getty Images)

All 298 people on board the Malaysia Airlines plane that crashed in Ukraine are confirmed dead. Among them were people who were traveling on vacation or reuniting with family members, as well as a renowned AIDS activist and many other global health representatives heading to an international aids conference in Melbourne, Australia.

Most of the passengers were Dutch. To find out about the response in the Netherlands and about the Dutch lives lost, Here & Now’s Jeremy Hobson speaks with Rutger Mazel, foreign desk editor for NOS, the Netherlands’ public broadcaster.

Can Fish Oil Supplements Reduce the Risk of Alzheimer's Disease?

It might be a tough pill to swallow, but it’s well worth it. While you may avoid fish oil supplements, fearing the fishy aftertaste or the off-putting smell, the results of a new study might just have you reaching for your pill box. They’re often touted for their heart-health benefits, but now researchers are saying that they might be ...