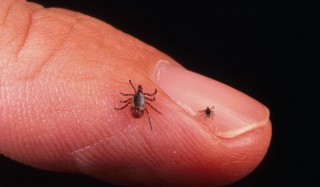 Lyme disease refers to illnesses transferred by insects. Although many still attribute transmission exclusively to ticks, according to Dr. Deitrich Klinghardt, one of the leading authorities on Lyme disease, the bacteria can also be spread by other insects, including mosquitoes, spiders, fleas, and mites.

Ticks are blood suckers, and prefer dark, crevices such as your armpit or behind your ear, or your scalp. Once it attaches itself and starts feeding on your blood, it will at some point “spit” its bacterial load into your blood stream. If it carries an infectious organism, the infection will spread to you via this salivary emission.

The disease may progress to muscle spasms, loss of motor coordination, and even intermittent paralysis, meningitis, or heart problems. For a more complete list of symptoms, refer to the Tick-Borne Disease Alliance.4 Lymedisease.org has also created a printable Symptom Checklist.

Despite debilitating symptoms, many Lyme patients outwardly appear completely healthy, which is why Lyme disease has also been called “the invisible illness.” People with Lyme often “look good,” and their blood work appears normal, but their internal experience is a different story altogether. As a result, many patients simply end up being referred to a psychiatrist. Doctors have even been known to accuse Lyme patients of being attention seekers, fabricating their illness… A big part of the problem is that Lyme disease is notoriously difficult to diagnose using conventional lab tests. One of the reasons blood tests are so unreliable as indicators of Lyme infection is that the spirochete has found a way to infect your white blood cells.

You can read the entire informative article by clicking here.

Is Fist Bumping Better For Health Than Handshakes?

Fist bumping may be better for health than shaking hands or high-fiving, a new study claims. This image shows powder transferred during a handshake, to demonstrate that the custom is far less hygienic than the modern fist bump. (Prifysgol Aberystwyth University) A fist bump is 20 times more hygienic than a traditional handshake, researchers report High-fives ...