Were You Deceived About “Silver” Tooth Fillings? 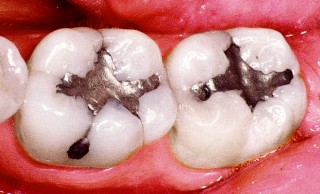 Are your tooth cavity fillings comprised of mercury? Does your dentist call them “silver” fillings? Is your dentist explaining this to you? Dental amalgams, which are made of mostly mercury, are toxic. The proof is finally here. A new report by the Consumers for Dental Choice shows just how toxic this filling is and how the FDA has deliberately deceived YOU into believing that “silver fillings” are safe. Get the report here:http://www.mercury-free.org/measurablymisleading.aspx  Dr. Mercola continues his never ending fight for consumer awareness of the deception in this area.

A Poll, a Report, and a Stinging Indictment of FDA’s Support for Mercury Fillings

So-called “silver fillings” are a massive consumer fraud. Even in the 19th century, respected doctors condemned the term, noting that the term was used to conceal the mercury.

When consumer fraud occurs in medicine and health, most Americans assume that the FDA would step in to correct the situation. But no, the FDA is on the side of the dental industry, which wants you to believe that amalgam fillings are silver, not mercury.

57 Percent of Americans Do Not Know Amalgam Contains Mercury

Consumers for Dental Choice commissioned a poll with the highly reputable and accurate Zogby Analytics firm. The results may not surprise our readers: fewer than half (43 percent) of Americans could name mercury as amalgam’s main component. Fully 57 percent gave an incorrect answer or did not know amalgam contained mercury.

Why is that? First, dentists generally are not telling them. Only 11 percent ever recall being told by their dentist that amalgam has mercury. Second, the term “silver fillings” is a consumer fraud if there ever was one. Indeed, a quarter of the respondents named silver as amalgam’s main component. Consumers are upset that the government lets this market deception continue, and call for enforcement action to stop amalgam as being marketed as “silver.”

With findings supported by five national organizations from fields of consumer protection, health, environment, and minority advocacy, Consumers for Dental Choice has issued a new report, Measurably Misleading,1 which explains the poll results and reveals how the US Food and Drug Administration (FDA) and the dental industry deceive you about mercury.

People have an absolute right to know that amalgam fillings contain mercury—even if they ultimately chose to get one. But mercury is going into people’s mouths because the dental industry is hiding the fact that amalgam contains mercury. While this survey does not let silent dentists off the hook, it identifies the lead culprit: the FDA.

Why? Because FDA is the nation’s regulator of devices. FDA exists to protect us from deceptive practices, false labeling, misleading labeling, and other marketing deception in healthcare. FDA’s own rules say that mislabeling occurs for “incorrect, inadequate, or incomplete identification.” The FDA could act to inform consumers about mercury dental fillings, but they don’t. Instead, the FDA calls amalgam “silver fillings” on its own website. It’s time for the FDA to stop misleading and start leading. FDA must say the “M” word, Mercury — and ensure that every parent and every consumer walking into a dental office knows that amalgam fillings are really mercury fillings.

Sure, things have improved. When Charlie began with Consumers for Dental Choice, only three percent of dentists were mercury-free. Charlie’s organization has been instrumental in catalyzing change in the industry. Today, more than 50 percent of dentists in America have stopped using mercury filings. That’s major progress. But we still have a long way to go to end this archaic practice of putting mercury in people’s teeth. Unfortunately, we seem to have stalled out at around 50 percent of dentists who still insist on using amalgam.

“We think the pro-mercury dentists have stabilized because they won’t learn anything new and the profits are so easy,” Charlie says.

“They are concealing from the patients that amalgam is a mercury filling. The enabler of pro-mercury dentistry or of dental mercury is the FDA. The FDA says to dentists and says to the manufacturers, ‘You may conceal the mercury from patients. You don’t need to tell them,’ and of course, therefore they don’t.”

We have a great team with a great achievement. Help us keep them going.

Why Is FDA Refusing to Act Against Dental Mercury?

Why exactly is the FDA so opposed to informing the public about the true nature of amalgam? The answer is simple: because the agency has been penetrated through the revolving door that’s so common in other industries. Just like Monsanto has penetrated the federal government’s regulatory agencies, amalgam profit centers have penetrated and effectively lobbied the FDA to remain complacent on this issue.

“It’s top-end bureaucracy,” Charlie explains. “At the top is the revolving door of people coming in from the outside corporate world, serving a little while, not running the agency, just having the title, and then going back into the corporate world. That’s one group. At the staff level is a permanent bureaucracy, which is impermeable. They don’t listen to anybody. It’s a great job.

They do what they want. They aren’t supervised by the revolving door leadership. In this case, the FDA bureaucracy is very pro-amalgam. Incredibly, the dental decisions are not made by toxicologists. Mercury is a horrible neurotoxin. It can and does damage the brains of developing children permanently, and yet they have a dentist in charge of this issue, a dentist who likes amalgam.”