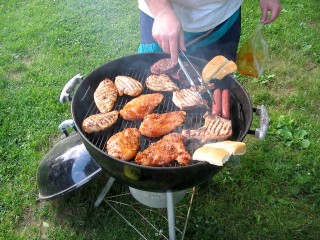 Actually there may be several things wrong.
Check out the following 2 newsposts.

The Environmental Protection Agency has its eyes on pollution from backyard barbecues. The agency announced that it is funding a University of California project to limit emissions resulting in grease drippings with a special tray to catch them and a “catalytic” filtration system.

The $15,000 project has the “potential for global application,” said the school. The school said that the technology they will study with the EPA grant is intended to reduce air pollution and cut the health hazards to BBQ “pit masters” from propane-fueled cookers. Charged with keeping America’s air, water and soil clean, the EPA has been increasingly looking at homeowners, especially their use of pollution emitting tools like lawn mowers.

“We expect to limit the overall air pollution PM [particulate matter] emissions from barbecuing and to alleviate some of the acute health hazards that a barbecue pit master can experience from inhalation. The particulate matter present during cooking with and without the grease diverter and PM2.5 filters will be tested and compared to that of current data using a conventional propane barbecue using a fumehood chamber with detectors at CE-CERT. Personal exposure of PM2.5 will also be monitored throughout the experimentation period to determine the degree of acute exposure of particulates to the cook.”

Austin City Council members debated a plan Thursday to put restrictions on smoke from barbeque restaurants. Council member Pio Renteria asked council to amend city code and regulate the amount of smoke that comes from food trucks and restaurants within 100 feet of residential areas. Renteria said residents complained to him that smoke coming from BBQ joints caused them to not be able to open their windows or enjoy their backyards. People living near the La Barbeque trailer in East Austin told their stories before council.

“They smoke several days a week, generally five days a week for 17 hours,” said Bruce Hughes. “I can no longer open windows, the smoke seeps in from the attic.” Restaurant owners also went before council asking for flexibility, especially for places that have not faced complaints.

Council members ultimately gave preliminary approval to the smoke restrictions, but recommended making amendments before approving up a final version of the ordinance. A final vote on the issue is not expected until this summer.

If you want to succeed at anything – find an expert who is also a good teacher in the subject you are interested in – and follow the experts’s advise. The following advise is from a body building expert and trainer – his tips will improve your training results – click the link below to read the entire post. 10 Best Training ...