What Does A Long, Happy Marriage Depends On? 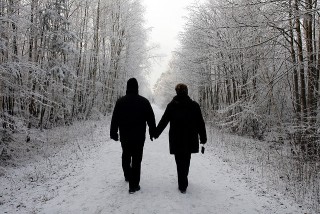 Couples try to make a go of it – if not – why did they get together in the first place. Ultimately – someone has to take the responsibility and be the one to take the leadership in coordinating the relationship and make sure it is successful – turns out it has to be the man.

A Long, Happy Marriage Depends On – the husband’s personality.

When men grow older with an agreeable disposition and are in good health, there are far fewer conflicts among couples who have been together a long time, according to researchers from the University of Chicago.

Oddly, such characteristics in wives don’t play as much of a role in limiting marital conflict, perhaps due to different expectations among women and men in durable relationships.

“Wives report more conflict if their husband is in poor health,” said lead study author James Iveniuk. “If the wife is in poor health, there doesn’t seem to be any difference in terms of the quality of the marriage for the husband.”

The study: The team analyzed data from the National Social Life Health and Aging Project, a survey that included 953 heterosexual couples who were either married or living together. The participants’ ages ranged from 63 to 90 years old, and the average length of their relationships was 39 years.

The goal of the survey was to compare the characteristics of the husbands to the characteristics of their wives and vice versa based on interviews with each person in which they were asked to describe themselves using the big five personality traits: openness to experience, conscientiousness, extraversion, agreeableness and anxiety. In addition, a sixth trait was added to measure positivity, an overarching characteristic described as a person’s overall desire to be seen in a positive light.

The happiness of the marriage can be summarized with this question: How much does your spouse bother you?

The clashes are not primarily about fighting or violence, but rather whether one spouse criticizes the other, makes too many demands or generally gets on the other person’s nerves.

Translation: Don’t turn into a grumpy old man, or you risk an unpleasant marriage or even divorce late in life.
–From the Editors at Netscape

Customer Reviews
5.0 out of 5 stars Better Marriage: On the road to a better relationship! November 4, 2013
By The Display Guy

While there are so many divorces today, doesn’t it seem like nobody ever stays together anymore? I think there would be a lot more happy people and married couples if they read this book. While it isn’t extremely long, there are a lot of excellent tips and information in this book to help you! The author stresses the importance of the value of team work in a marriage. I recommend reading it! Thumbs up!