Why Do Women Prefer Fit Men? 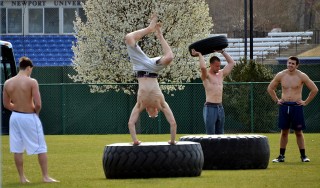 The research here is verifiable. Just ask the ladies.

You may think women prefer men who are muscular, trim and fit–instead of those who are flabby, fat and puny–because they are more handsome. Not so! At least, not consciously. It turns out that women like hunks because they have fewer germs. And that is evolution at work.

HealthDay News reports that a study by Polish researchers found that there were more “bad” bacteria (yes, some bacteria are good) in the nasal passages and throats of heftier men, compared with those who were slimmer and more fit. Presumably, fitter men are able to resist these potentially dangerous bacteria that can cause disease, which leads women to (subconsciously) find them more attractive.

The study: Led by Boguslaw Pawlowski of the University of Wroclaw, the team took nose and throat swabs from 90 healthy men and 103 healthy women to determine which of them were “colonized” by six potentially harmful species of bacteria bugs, including those from the staphylococcus or streptococcus families of microbes, reports HealthDay News.

The results: Men who had a high lean body mass were less likely to harbor potentially harmful microorganisms, while heavier, less fit men were more likely to have those bad bacteria in their nasal passages and throats. No weight-related differences were found in the amount of bacteria women carried.

It’s long been known that when human beings are choosing a mate, they find others attractive based on certain body and facial characteristics that signify better health and genetics.

Pawlowski says the amount and type of germs carried in our respiratory tract is a reliable indicator of our biological condition.

The ability to fight off potentially harmful bacteria from taking up residence in one’s body is called “immunocompetence,” and Pawlowski theorizes that more attractive men might also be more immunocompetent.

The study findings were published in the American Journal of Human Biology.

A new and almost unbelievable concept – Sense of taste affecting length of life! Call it the ultimate taste test. Taste buds may have a powerful role in promoting a long and healthy life–at least for fruit flies, according to the first detailed look into the role of taste perception. Researchers from the University of Michigan, Wayne State ...