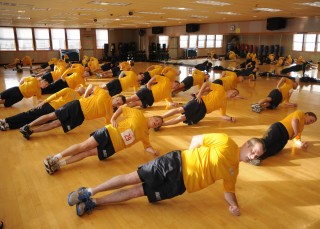 It’s long been known that regular exercise has multiple benefits, ranging from weight loss to disease prevention. Now it appears that running, jumping and swimming may boost your mind as well as your muscles. How? Those who exercise appear to have more oxygen circulating in their brains, which could result in a sharper mind, reports HealthDay News of a study conducted by the University of Otago in New Zealand

The study: Led by psychology professor Liana Machado, the team followed 52 healthy women between the ages of 18 and 30, all of whom were university students. Each completed a range of cognitive tests, while their oxygen availability in the frontal lobe of the brain was measured using near-infrared spectroscopy (NIRS). In addition, each woman explained how frequently she exercised.

The results: The women who regularly exercised had higher oxygen availability in the frontal lobe of the brain and performed better on difficult cognitive tasks, compared with those who exercised less. This is surprising, since it has long been assumed that the brain activity in young adults, who are in their prime, is at its peak–with or without exercise.

While it’s long been known that aerobic exercise improves brain function in older adults, it has not been shown until now to have this effect on younger people.

“This provides compelling evidence that regular exercise, at least five days per week, is a way to sharpen our cognitive ability as young adults, challenging the assumption that living a sedentary lifestyle leads to problems only later in life,” Machado explained.

The exercise can be either vigorous running or just brisk walking, and it can be done in 10-minute intervals if that is more convenient.

The study findings were reported in the journal Psychophysiology.

We joke and call them “senior moments,” but it’s not funny when you can’t remember a word, a person’s name or where you put your keys.
The solution? Go take a walk. When seniors regularly took brisk walks for one year, an amazing thing happened: The hippocampus, the section of the brain that is involved in memory, actually grew in size, according to researchers from the University of Pittsburgh and University of Illinois at Urbana-Champaign. Typically, the hippocampus shrinks as we age.

The Associated Press reports that not only does aerobic exercise seem to reduce brain atrophy in early-stage Alzheimer’s patients, but also leads to a slight improvement on mental tests among older people with memory problems.

The study: Some 120 sedentary people, ages 55 to 80, were randomly divided into two groups. Half began a program of walking for 40 minutes a day, three days a week to increase their heart rate, while the others did simple stretching and toning exercises.

The results: In the 60 walkers, the hippocampus, that region of the brain that is associated with memory, grew in size by about 2 percent, while it shrunk in the 60 people who just did the stretching and toning exercises. Researchers found there was some memory improvement in both groups, but in the aerobic exercise group, increased hippocampal volume was directly related to improvements in memory performance, notes AP.

“We think of the atrophy of the hippocampus in later life as almost inevitable,” lead study author Kirk Erickson, a professor of psychology at the University of Pittsburgh, said in a statement. But it doesn’t have to be that way. Even moderate amounts of exercise by sedentary adults can lead to substantial improvements in memory and brain health.

The study findings were published in the Proceedings of the National Academy of Sciences.

Do You Know The 5 Foods That May Prevent Heart Problems?

Eating right can prevent heart health problems 5 Foods Your Heart Will Thank You For Eating. Heart disease is one of the biggest health dangers in the country — 830,000 people die each year due to some form of heart disease. Is it possible that with just eating these 5 foods – you can prevent heart problems? One thing is however for sure ...